Be warned: you have three types of competitors 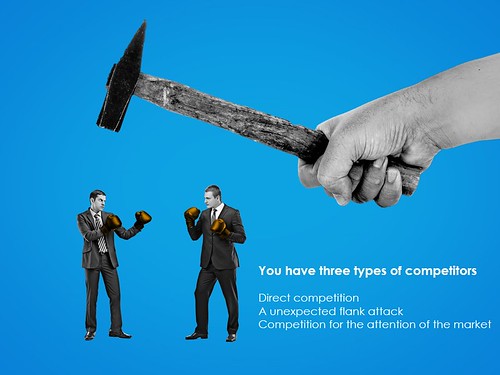 Apart from direct competition, there is also a second type: the unexpected flanking maneuver. Examples include the impact of Amazon on retailers or the rumor that Google was entering the financial world. Booking.com bowling over the hotel industry and immediately being put back into their place by AirBnB… More and more often, truly dangerous competition comes from unexpected sources and not from direct competitors.

Today’s fresh competition comes from the online world. In the financial world there’s a company like Lending Club that acts as a sort of eBay for personal loans. Last year they realized a turnover of $ 1.5 billion in personal loans and this year they’re expected to reach the $ 2.5 billion mark. There’s AirBnB, where consumers offer each other accommodations. In five years’ time, the company’s annual booking volume has surpassed that of the Hilton group. Uber, a digital taxi service, has already cornered 30% of the taxi market in San Francisco. Uber is a network of private drivers that offers nice cars and friendly drivers at half the usual rates. Care to venture a guess what the customer prefers? An expensive fare charged by an unfriendly driver in an ugly car or a cheaper fare paid to a friendly driver in a nice car? Talk about a no brainer! Sooner or later, every industry is outflanked. These attacks come hard and fast and are impossible to predict. Look for the competitor who upsets the standard business model in your industry. That is your most dangerous competitor right there.

And finally there’s also a third type of competition: competing for the customer’s attention. On an average day, consumers process anywhere between 3 to 8,000 commercial messages. We are bombarded with ads and commercials. This third type of competition is characterized by countless sources trying to win the customer’s attention. Research conducted by InSites Consulting and myself shows that consumers are willing to build a profound communication relationship with no more than 5 brands. This means that as a bank, you’re competing for the customer’s attention against Apple, Lego, Disney and other love brands. Today, every brand has to take into account the competition of love brands in their communications. The need to come up with excellent, relevantand inspiring stories has never been greater. Nowadays, the market tends to lose interest in companies that only communicate about their brand. The challenge is to wedge yourself between the love brands by telling a compelling story and by being relevant for the customer. A company like Maersk has been able to do just that. Maersk moves containers from point A to point B. Even though this is probably one of the most boring industries to work in, the company still boasts 1 million fans on Facebook and they have a fantastic reputation. They’ve done this not by talking about containers but by profiling themselves as the â€˜experts of the ocean’. This is the challenge every modern company must meet. Think about how you can earn the customer’s attention because your competitors are the world’s most appealing brands.

Every company faces three types of competition: direct competition (the easiest to monitor), a flanking maneuver from an unexpected source (being prepared is crucial) and competing for the customer’s attention.