From self-service to self-control to automation

During the past 15 years customer relationships have moved steadily in the direction of self-service. In my new book 'When digital becomes human' I argue that this process of digitalization will be taken a lot further in the years ahead.  The customer relationship of the future will be fully automated. Consumers will do less and less for themselves; everything will be done for them. There will be no more complaints, because problems will be solved pro-actively, before they even arise. Call centers will have no incoming calls; instead; they will be calling you! 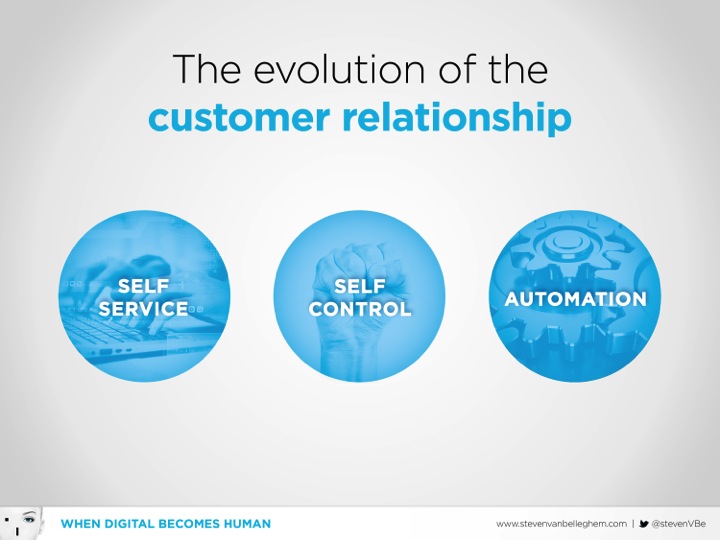 Check out this 3 minute video to hear my talk about this topic!

I want everything! And I want it now!

It is built into our genes. Even as small children we want to try everything, do everything for ourselves. And when we discover we can’t, we immediately turn to mum and dad for help – and expect them to be there.

Modern consumers show the same kind of behavior. The biggest part of the fun about e-commerce is searching for all the things that interest you. For example, trying to find your perfect holiday home for this year’s vacation is much more fun online than flicking through the travel agent’s brochures, the way we used to. Internet has made the consumer independent And it has also increased consumer expectation in terms of both service and speed. 90% of people regard speed as an important factor in their dealings with a company. But it doesn’t stop there. 89% want full transparency with regard to the next step in the sales process. 88% want their questions to be answered in a single communication transaction. 70% want communication channels that are always available (data based on my self service research report) . In fact, the modern consumer wants everything – and he wants it now! Speed, availability and efficiency are his watchwords.

For many companies it is financially impossible to live up to these high expectations. This means that the companies have only one alternative: self-service solutions. This is also a concrete expectation of the market. When the banks almost forced consumers to carry out their own banking transactions via online banking at the end of the 1990s, at first there was considerable consumer anger. Levels of service would fall, it was claimed. But today 70% of consumers expect self-service solutions from the companies they deal with. 40% prefer self-service to interaction with the company. Things have come so far that nowadays people find it strange if they actually need to go to their bank to sign something. ‘Surely this can be done digitally?’ they moan. What an evolution! All these findings are based on my own research study ‘The Self-service Economy’.

From self-service to self-control

Internet gave the consumer access to information. Social media added transparency to the equation. Digitalization brings self-control. Self-control – control of the entire process – goes much further than self-service. Today, the world is reactive. If consumers have a problem or a question, only then do they go in search of an answer. The world of tomorrow will be proactive. With self-control, the consumer is always in the driving seat.  Perfect proactive communication will mean that problems will be tackled before they even arise. This will affect the entire purchase cycle. From the pre-purchase to the after-purchase phase, the consumer will have far more control over all aspects of the process.  As a result, companies will need to adjust far more to the wishes and expectations of their customers. With self-service, the customer is happy if he gets a good online solution. With self-control, the customer will want to be much less dependent on the goodwill of the companies he deals with. This trend will not only have a huge impact on the commercial world, but also on society as a whole. Sectors such as health and education will be radically transformed by this evolution. MIT already speaks of the ‘Internet of You’, where the customer controls all his own data, processes and relations.

Do you accept MY conditions?

Consumers regularly need to tick a box to show that they accept the conditions of the company they are dealing with. I imagine that the majority (me included) never read these conditions. In 2012, Doc Searls, co-author of the pioneering book ‘The Cluetrain Manifesto’, published a new book called ‘The Intention Economy’. In this book he discusses the new role of the consumer in the customer relationship. He argues that the old roles will be reversed. In future, companies will need to accept the conditions of the customer, not the other way around. Tomorrow’s customers will want more control over their own data and decisions. Sites like Priceline are already offering a market place where the customer is in control of everything. Potential customers simply type in the destination of their choice and the amount of money they are willing to pay. Companies are then free to make different offers to the customer based on his criteria. In other words, the customer is asking: ‘which travel agent is willing to accept MY conditions?’

We will also see the same evolution with regard to data. Since Facebook raised the bar when it required its one billion users to switch to its own Messenger, consumers have become more aware of data evolution and its implications. The time will come when consumers want to regain control over their own data. If a consumer gives a company access to his data, he will expect something concrete in return. In other words, he will set his own conditions for the use of his data. And if the companies do not meet these conditions, they won’t get the data. 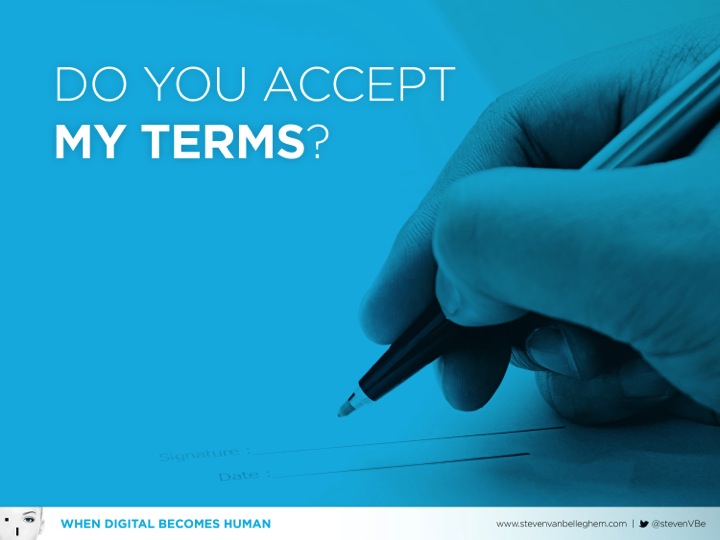 From self-control to automation

In the near future there will be sensors just about everywhere, from your local motorway to neighboring planets in our solar system. These sensors collect information and take decisions. Before too long, we will have sensors in our clothes, our coffee machines, our heating thermostats and even our toasters. It is estimated that by 2020 the sensor market will be worth 29 billion dollars. Gartner predicts that by this same year some 26 billion consumer products with integrated sensors will have been sold. In their book ‘The Age of Context’ Robert Scoble and Shel Israel describe how sensors will revolutionize the customer relationship of the future.’The Age of Context’ and sensors introduce a new phase in the digital customer relationship: the evolution from self-control to full automation. In the future, customers will expect perfect pro-activity. Within years, the information currently provided by Google will seem old-fashioned. Instead, customers will automatically be provided with the right information on the basis of their own context.

Automation is the next stage, the superlative, beyond self-control. If a producer thinks about the innovation of his products, at the present time his thoughts are focused too much on new features and applications. However, modern innovation should focus more on new possibilities for better communication and greater network effects between different products. Wink, a company that develops self-control applications for the domotica sector (the automation of domestic appliances) is now facing a new challenge from Nest. Wink has built up a reputation for developing highly user friendly tools that allow people to exercise trouble-free control over their homes. The homeowner can control all the crucial functions in the house, whether he/she is in the building or not. But Nest takes things a step further, particularly in the development of smart thermostats and smoke detectors. On the basis of the homeowner’s past behavior, the technology ‘thinks’ for itself and makes the right decisions. This means that the temperature in the house will never be too warm or too cold. In the years ahead, the Nest philosophy will lead to the creation of an open ecosystem in which other producers (for example, of small domestic appliances) will wish to participate. This will eventually allow all these appliances to start taking their own decisions, so that everyone’s home will be able to function at an optimal level, with the ultimate purpose of maximizing the living experience for the homeowner. Nest will eventually replace Wink. Automation will eventually replace self-control.

Towards a fully automated customer relationship

Self-service offers consumers the possibility, albeit reactively, to manage the different phases of the purchase cycle. Self-control introduces the element of pro-activity. On the basis of data available in real-time, consumers acquire a proactive attitude. In future, the customer will put his conditions to the supplier, not the other way around.