How to foster and “open door button” culture in CX

A few weeks ago, I read this fantastic article from The Verge’s Mitchell Clark about the open door button which inspired me to think about what that would mean for a company’s CX culture. In it, he explains that pushing the open door button in an elevator can give you the best feeling ever. When people are in a hurry and might otherwise not make it in time before the doors close, it can really help you make someone’s day. Pushing that button at that moment allows you to become the hero in the story, cherishing a warm feeling and thinking “you know what, I did this for you”.

And I really think that that mindset is something that we can use in our organizations. 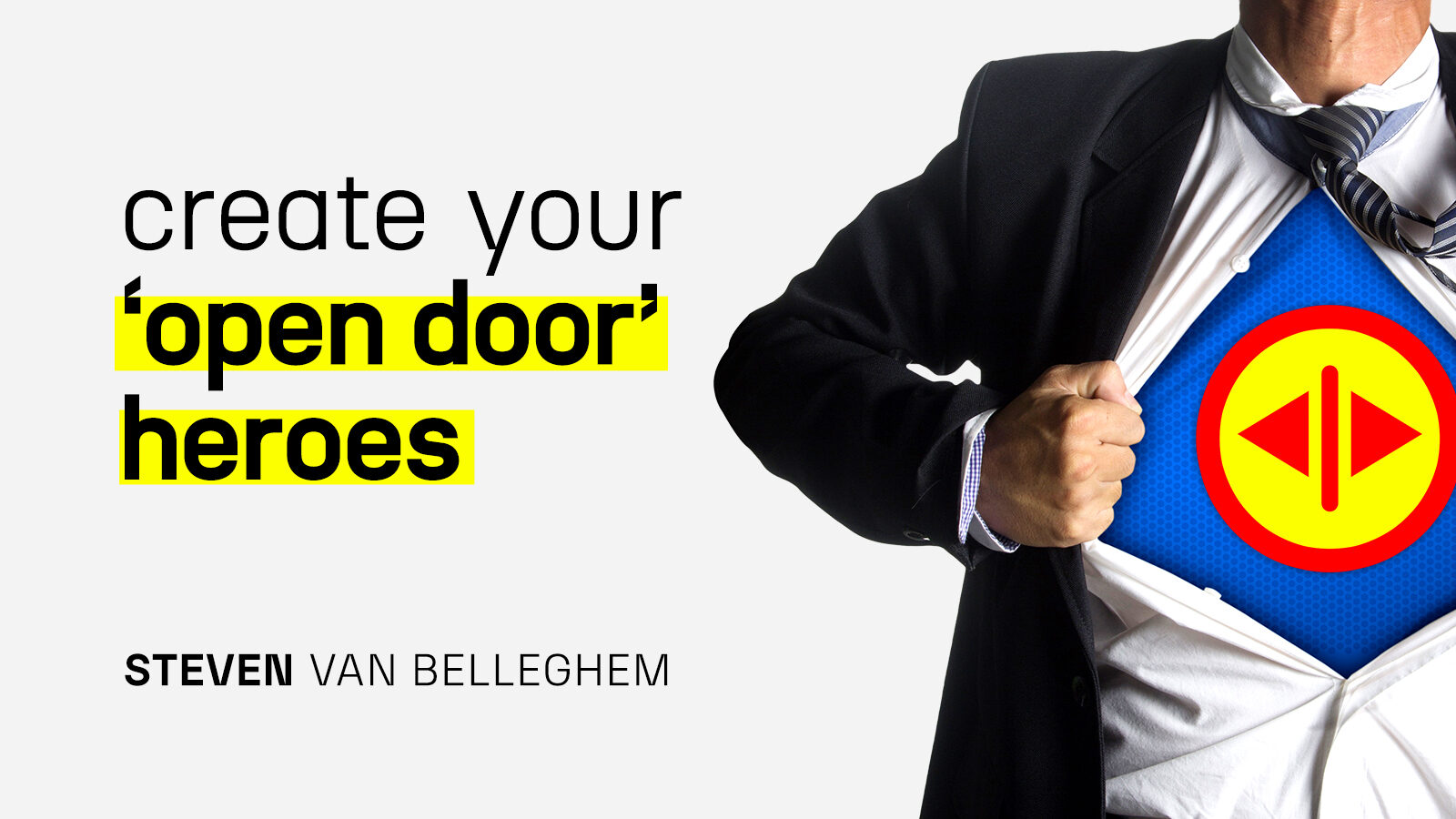 Two ways to react to the same type of situation

I want to illustrate with two incidents in everyone’s “favorite” places in international travel, which can really teach people a lot about customer experience and empathy: customs and security. A couple of months ago, I found myself in a German airport, having flown in from Thailand and on my way to a connecting flight to home. However, my incoming flight was late, and when I got off the plane, boarding had already started. Being in such a rush, I asked the security guard – I think very politely – if he could help me to move through security in a faster way, seeing that my flight was already boarding and there were a lot of people before me. But my somewhat desperate appeal seemed to have triggered something in him and had the total opposite effect as a result. In fact, he did pretty much whatever he could to make sure that I would miss that flight. He performed extra security controls, really dove into all of my bags and it took so long that I did miss my flight. That’s situation A.

What happened to me in St. Pancreas Station, however, was completely different. Again, I was late to catch my transportation, a train in this case. When I arrived at the passport control, I saw this huge line and I realized that I would never ever be able to get there in time. So I accepted my faith and knew that I would have to wait an hour and a half before the next one. But then one of the attendants suddenly yelled “are there any people here who need to go on the next train”? So I raised my hand together with four or five other people. Then he asked everyone who was not on the next train to take a step to the right and let us pass. He asked everyone to work together to get us in time on that train. And everyone did just that. They moved to the right so that we could speed through customs and jump on that train in time. And it was amazing. And all the other people in the line, they felt like heroes because they were actively helping us by moving aside. They were saving my day.

And that’s the open door button philosophy, giving employees, or even sometimes customers, the opportunity, the tools and the mindset to become heroes. Asking them to be sensitive for moments when you can push that button to keep the door open when someone is in a rush or when someone is in need for help.

Fostering that mindset in an organization so that whenever they can, employees can push the “open door button” will have just brilliant results. And it’s totally fine if you work in an organization that is really into processes. Imagine customs and security without processes. That would be insane. In fact, every company needs processes. But add the “open door button” culture to that and it will make an enormous difference to your customers. So I get really excited about this.

The ”open door button” culture is really about being 100% open to helping people in extra-ordinary situations, which at the same time makes your team feel really good about itself. So it’s just as much an internal culture as it is an external culture thing. In fact, something that you may not immediately think about is this: if your company only focusses on rules and processes and employees have no freedom at all to decide to help a customer in a difficult situation because there are no processes for it, your employees will probably suffer from that too. Because they will actively feel the customer’s distress or anger and that will give them a bad feeling, and frustrate them too. Working in that type of environment will just drain them of energy and will have a toll on their engagement and productivity.

Just imagine a 6-year old’s birthday at a restaurant, where the little girl wants to eat a grown up’s plate in a kid’s size. She does not want the spaghetti or the chicken with apple sauce which are the usual choices for kids but wants salmon with gratin dauphinois and salad “like a grown-up”. Of course, the waiter could say “no”. It’s a hassle, because they will need to cut the salmon in two and then be left with a piece that no one will want. So he could say “no” or he could force the family to buy her a grown up plate, and then they will just end up throwing away the leftover food. But we know that if he says “no”, the little girl will cry on her birthday, or the parents will be annoyed and the atmosphere will be ruined, and he will probably have a really bad feeling about that too. But if he says “yes”, and maybe asks the chef to do something special, like cut the gratin in the form of a heart, or put candles on it, he may feel just as happy about that as the little girl and her family.

It may sound strange, in a way, but the “open door button” culture is just as much about employee wellbeing. And there is science behind that bold statement. Past research has shown that helping others has a wide variety of benefits: Being kind and helpful can make us happier, give us a sense of purpose and meaning, and even lower our blood pressure. And people across cultures seem to experience greater well-being when they help others, suggesting this may be a human universal.

So the “open door button” culture is beneficial for both your customers and your employees. Processes are needed, but empowering employees to become heroes and act in kind and uplifting ways to exceptions is just as essential.