As some of you already know, my friend and business Partner at nexxworks Peter Hinssen wrote one of the chapters in my new book, The Offer You Can’t Refuse’ (OYCR) and so I really wanted to share the insights of his Hourglass innovation model here as well. What I love about Peter’s input in the OYCR is that he offers a fantastic blueprint on how to move from concept to actual execution with impact. It’s a wonderful masterplan for those of you who have great ideas – on offering your customers the ultimate convenience, becoming their Life Partner and helping to Save the World (the 3 pillars of my new book) – but need a little help with transforming these into commercially viable action.

During our conversation, Peter told me that he had become really intrigued by those traditional companies that always seemed to be able to reinvent themselves at the right moment: “that is where innovation plays out in the most extreme form”. That phenomenon – which Peter called phoenix companies – became the inspiration for his book The Phoenix and the Unicorn. The Unicorns in the title, then, are of course start-up companies with a value of over $1 billion like Airbnb, Didi Chuxing, Palantir Technologies, Spotify or Blablacar. Peter also explained why he is a lot less excited by unicorns: “starting from scratch and doing something unique may be hard, but it is relatively easy compared to keeping an ‘old’ mastodont agile enough to adapt to the changing customer”.

One of the companies that he was researching for his book was Medtronic, the largest medical device company in the world, with more than $30 billion in revenue. Peter discovered that they had a very interesting take on innovation with a model that he called the hourglass. 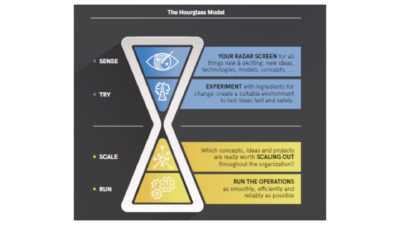 As you can see in the visual above, the top of the hourglass is like a wide lens that helps you look outside your normal vision and understand the signals from an ever faster changing world. The SENSE element of this top part is a radar screen for all things new and exciting: new ideas, technologies, models, concepts, developments, you name it. The second element of the top part of the Hourglass is the TRY segment. Once you have identified ingredients for change in your ‘Sense’ section, you need to experiment with them and create an environment where you can test ideas fast and safely. The narrow part between the top and bottom part is the filter, where you need to choose the ideas that you will commercialize. According to Peter, this is one of the most crucial things to get right, also from a cultural and psychological safety point of view: moving from that wide lens and then figuring out what to do.

The importance of alignment and mutual respect

The bottom half of that hourglass, is where you scale your successful experiments and then run them for efficiency. Over the last century, we’ve actually built a lot of companies for that scale and efficiency and that is why older companies tend to have a really big bottom half of that hourglass. They run their business like Swiss clockwork but there is no balance between that wide lens of ideas and experimentation on the one hand and then the scaling and running it in the most efficient way on the other. “That’s why there’s so often a disconnect between the innovation team and the machine-like structure of the rest of the organization”, explained Peter. “But that alignment is absolutely crucial. We’ve seen so many examples where the brilliant ideas of these even more brilliant innovators fall into non-fertile ground and are just completely lost.”

He went on by saying that “what is just as crucial as alignment, though, is mutual respect”. “The innovators need to understand that the only way that they can look at the Day After Tomorrow of the company is because there is also an efficient machine that is making money and turning a profit. But at the same time, the people who run the machine, ought to be really thankful for the team in the top part of the hourglass that is creating a new Day After Tomorrow so that they can reinvent themselves to stay relevant. Decision makers need to understand and accept that the top and bottom part of the hourglass might just have two completely different types of cultures, with a different mentality or and even very different people. Making sure that you have that type of a vision where you align those cultures and align those mechanisms is of the essence.”

When I asked Peter about examples of companies that did managed to align those two cultures in the best possible way, he started with Disney, which is also one of my top favourite companies of all time, as you might know: “Disney, for instance, has used acquisitions to create input for new ideas, but at the same time, they figured out how to really make sure that this becomes a mainstream part of the machine. A company like Microsoft, then, is one of my big heroes. It has gone through probably one of the biggest transformations in the last decade, moving from a license business to one that is completely cloud based. Former CEO Steve Ballmer may have been a really brilliant at running the bottom half of that hourglass but he was basically a sales guy who pretty much ignored their brilliant R and D departments. I remember somebody saying “there are probably 10 Googles inside of Microsoft R and D right now, but they’re not getting outside”. How tragic is that? But what Satya Nadella, the current CEO, did from the very beginning, was to make sure that there was an alignment. He made sure that the new brilliant concepts were fed it into machine so that they could really transform it.”

When we talked about what mostly drove the success of this alignment, he told me that the cultural element and the vision of leadership is extremely important. “Maybe the most important inspiration for my book “the Phoenix and Unicorn” was Walmart. They’re the largest retailer in the world and employ no less than two and a half million people. Although they’re publicly quoted, they’re still family owned. Now the Walton family still controls the majority of the shares, but the CEO Doug McMillon was also crucial in making sure that they were playing the long game. He ensured that they were innovating and changing the machine at the same time, building the plane while they were flying so to speak. If you don’t have that top leadership commitment of people who can actually understand both the new and the old and combine that in a balanced way, I think it’s very difficult to turn innovation into execution and keep yourself relevant.”