The Turing test measures the ability of a machine to act as though it is a human being. The test was invented by Alan Turing in 1950. In his paper 'Computing Machinery and Intelligence' he asked the question 'can computers think?' Thinking is a difficult concept to demonstrate. Consequently, he redefined the question as 'Can computers imitate people?' Since then, this question has been known as the Turing test. To decide whether a computer is able to pass the test, a conversation is organized between man and machine. If the person thinks that he is talking with another person, the computer has passed the test. The test is not about giving concrete answers to specific questions. It is about coming across as human. The test is purely textual, with no sound. 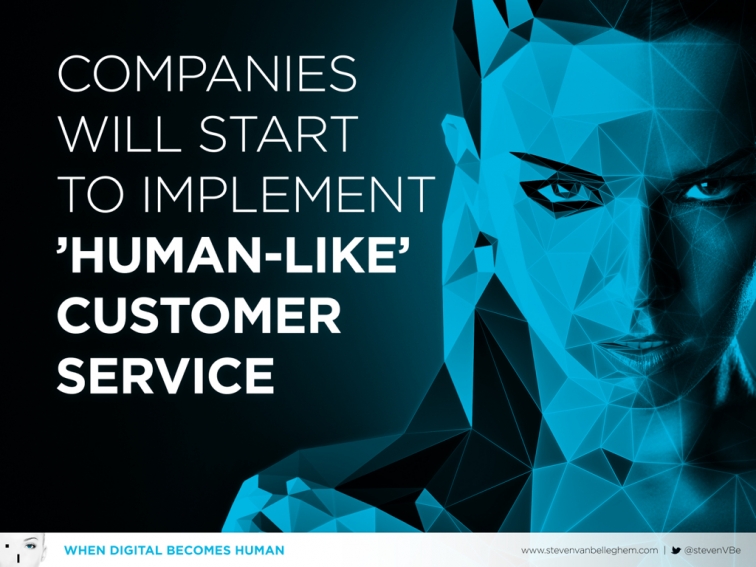 This 2 minute video gives you some more details about ‘human-like’ customer service. It is a short video from one of my keynote speeches.

In June 2014 news was released that a computer had succeeded in passing the Turing test for the first time ever. The Russian computer known as Eugene Goostman convinced 33% of the jury members that it was human. But critics were quick to dampen the euphoria. ‘This computer actually failed the Turing test big time,’ said Joshua Tenenbauw, the MIT’s expert in artificial intelligence.  Firstly, only 33% of the jury members were convinced. Secondly, the artificial test subject was portrayed as a Ukrainian boy of 13 with English as his second language. This allowed the computer to make many mistakes that would be unacceptable in other circumstances. As a result, the test lost its credibility for most observers. In fact, many scientists now doubt whether this 60-year-old test is still really suitable for testing modern technology. Even so, many computer scientists still dream of being the first to get their ‘machine’ successfully through the Turing challenge. And one day soon it will no doubt happen. People like building computers with human qualities. As time passes, our modern technology will be invested with more and more human characteristics.

The evolutions all point in the same direction. At a certain moment in time, our technology will come to have a human feel. At that moment, when digital becomes human, organizations will be able to offer a human service via their digital channels. In August 2014 IBM launched a new chip called TrueNorth. This chip is more like the human brain than ever before. Like our brains TrueNorth has multiple cores and more than 1 million neurons. Admittedly, the chip only has brain power at the level of a bee, but a whole group of bees together. Today, this is spectacular. But imagine what will happen in the next five to ten years! The day is approaching when it will no longer be possible to tell the difference between a computer voice and a real person. When digital becomes human is about the addition of humanness to the customer relationship, but also about finding ways to steer that seemingly human relationship by digital means.

‘Ask Jess‘ is an initiative in this direction. ‘Ask Jess’ is the virtual helpdesk of the Jetstar airline. Travelers can ask this ‘lady’ for all kinds of practical information. The first results from Jetstar passengers have been very positive. Jess understands them well and manages to give them the answers they need. Of course, people can see that they are talking to a virtual woman, but the general feeling they have is a good one. What’s more, this lady is available 24 hours a day for an unlimited number of passengers. It is at moments like these that you really think: ‘digital is becoming human’. 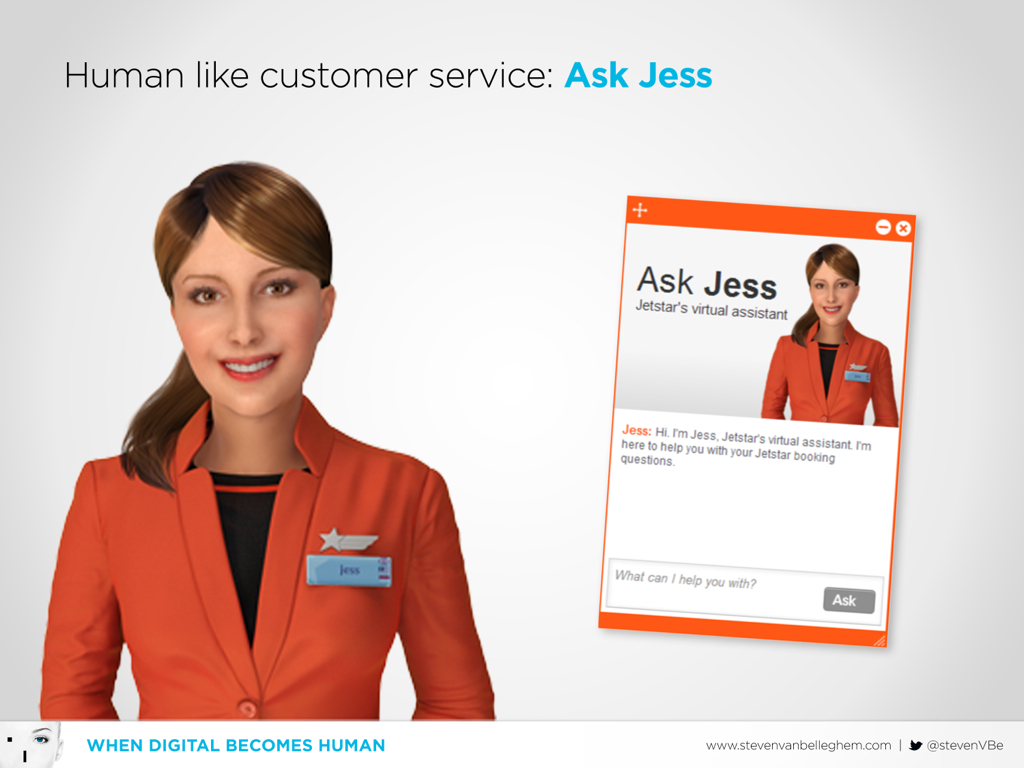 In the very near future, companies will have to choose between true empathy (with REAL people) versus programmed empathy (with human-like services). On the one hand, this is a cost game. The virtual teams will be a lot cheaper than the human teams. On the other hand, this is an emotional question: do we want to replace all human interactions with computer interactions. Some companies will be extreme on both sides of the game. Some will go all the way with human like services, others will go for the real human interface. My guess is that the majority of the companies will choose a hybrid system. In such a system, all basic and routine questions (which is often 80% of the inbound questions) will be covered by human like services. The real difficult or real personal questions will be addressed by a real human. This will increase the service on different levels. The speed, knowledge and availability will increase for the 80% standard questions. This will make customers happy. The moment when a customer has a more difficult questions, the customer will find an engaged human that is willing to listen and help. In many cases, the cost effective measures of a contact center will not apply for this group. The goal will be to create a great customer experience. This will not only improve the service for the clients. In my opinion, this will make the job content for the employees in contact centers more appealing as well.