Social Media as a perfect partner for the Conversation Company

The core philosophy of the Conversation Company is based on three layers: a customer centric company culture, people who make the culture tangible and act like ambassadors for your brand and finally social media as the perfect partner to boost the great stories to another dimension.

Social media are a means, not a target

For the Conversation Company social media are a means, not an end. Social media are the ideal partner for the Conversation Company. The advantages are obvious: speed, a wide potential reach, a human method of communicating, no hierarchy, full transparency, the creation of communities, etc. It is the only channel where feedback from the outside world is transparent and so direct. Social media force companies to be more honest, quicker and clearer in their communication. This trend has allowed companies to develop in the direction of genuine customer-orientation.

The checklist mentality which some companies use when dealing with social media is not the right way to maximise your conversation potential. Regarding Facebook pages and Twitter accounts as some kind of magic trick will only lead to disappointment. The reality is that, with a few exceptions (such as Charlie Sheen), nobody is likely to have a million fans on the first day. For the vast majority of companies, it takes time and effort to build up a community of fans and followers. Besides, wide reach on social media is only one of the important criteria. Building up a strong relationship with the customer is just as important.

In the previous post I discussed the important role played by your employees in helping to make your culture tangible. In this post I will be showing how social media are the ideal way to spread your culture and stories about your company on a wide scale. In addition, social media are also the ideal place to conduct structural collaboration with your customers. The Conversation Company seeks to exploit these possibilities and to integrate social media into all aspects of its organisation.

In recent years, social media have built up a huge following of users, with an enormous potential reach. In July 2011 there are 1.2 billion social media users worldwide. 96% of people have heard of Facebook and 62% are users. 80% know of Twitter and 16% are users. In addition, more and more people are using social network sites to link themselves to particular brands. More than half (600 million people!) follow at least one brand via social media. In Europe 51% of social media users are linked to a brand; the figure for the United States is 57% and in India a massive 70%. Media, fashion, food and retailing are the most popular sectors to follow. People expect information about products, promotions, invitations to events, etc. They want to give feedback and are keen to collaborate on the development of new ideas. These are all opportunities that companies need to exploit.

The two social media dimensions of The Conversation Company

The Conversation Company manages social media on the basis of two dimensions.

Dimension 1: Building up reach
Via social media, it is possible to look at everything your company does through a magnifying glass. Companies which have many fans on Facebook and Twitter have the luxury of being able to spread their stories, content and campaigns on a massive scale. Social media allow the reach of every action you take to be multiplied both directly and indirectly. The built-up reach of your own social media channels is the ideal way to communicate directly with your fans and followers. Coca-Cola makes excellent use of these opportunities. Their â€žHappiness Machineâ€Ÿ films are spread exclusively via their social channels. In this advertising gimmick, the traditional drinks machine is transformed into a box full of surprises. Every time that someone orders a can of Coke, they get an extra surprise. This can vary from a second can of Coke to a giant pizza or even fifty free bottles of their favourite drink. The actual machine is only physically â€žavailableâ€Ÿ to a handful of people, but Coca-Cola film the machine and distribute the video to their 26 million Facebook fans worldwide.

In addition to the direct effects of a wide social reach, there are also a number of indirect effects. When the Belgian entrepreneur Wouter Torfs posted a tweet in which he asked for people interested in working in his local chain of shoe-shops, many pundits thought that he was wasting his time. â€žThe target group he is searching for might not be on Twitter,â€Ÿ said the critics. However, the tweet brought Torfs a number of interesting indirect benefits. The next day there was a full page article about his tweet in one of Belgiumâ€Ÿs best-read daily newspapers. And, thanks to all this free publicity, just a few days later all his vacancies were filled.

Although a wide reach is important, social media also offer interesting short reach possibilities. Helping individual customers can mean a serious added value for both the person concerned and for your company. The numerous webcare teams in companies such as ING, Delta Airlines, Comcast, Dell, Gatorade, etc. show the value that leading companies attach to this enhanced form of customer service. No single conversation is left unanswered. And by helping individual consumers, you are maximising your conversation potential.

Dimension 2: Building up structural collaboration with the market
For the very first time, companies now have the opportunity to build up a structural relationship with a large group of people. Customers want to be involved with your company. The Conversation Company tries to create a â€žweâ€Ÿ-feeling between itself and its consumers. The structural involvement of customers in your management processes is a part of this approach. And social media offer a framework that is ideally suited for this purpose. Dunkin Donuts regularly asks the help of its fans to think up new product concepts and the fans do indeed regularly submit fresh ideas for new donuts. Sometimes this collaboration goes further than simple product development. Last summer the brand asked for help in compiling a list of summer songs that fitted well with the tastes of their ice smoothies. Before Dunkin Donuts takes action, it always consults the opinion of its fans.

Notwithstanding the fact that structural relationships are the objective, loose individual contacts can also create added value. If a customer accidentally comes across interesting content from your company, this may immediately result in the sale of a product. Long- term structural relationships often start with this kind of chance internet encounter. And the more of these encounters you can transform into lasting partnerships, the greater the impact of social media on your company will become. In this manner, the quantitative contacts of the first dimension (reach) will be transformed into qualitative contacts via the second dimension (collaboration).

Every company dreams of having a large number of qualitative contacts. This is something that the Conversation Company also wishes to achieve, but without losing sight of the value of individual, one-off contacts. This is the unique aspect of social media: wide or narrow reach, structural collaboration or one-off contact â€“ they all have their value. Every type of conversation is valuable both for the customer (who is helped) and the company (which benefits from positive conversations). 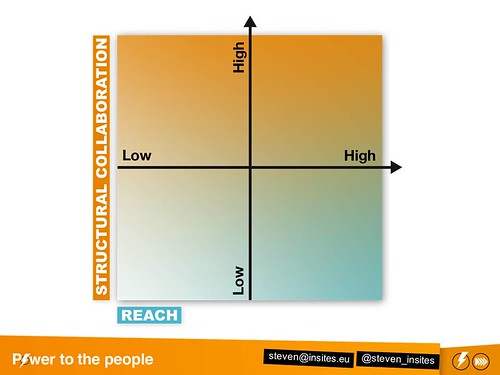