The 5 ways that Amazon is building a fantastic customer experience

Few companies excel more at creating a phenomenal customer experience than Amazon. It’s one of the reasons why the company was able to grow into the largest Internet company by revenue in the world and the second largest private employer in the United States. But the truth is that, under the leadership of its Founder Jeff Bezos, it has worked incredibly hard to reach its success, always staying true to its vision of becoming “Earth’s most customer-centric company.”

Here’s what you can learn from that: 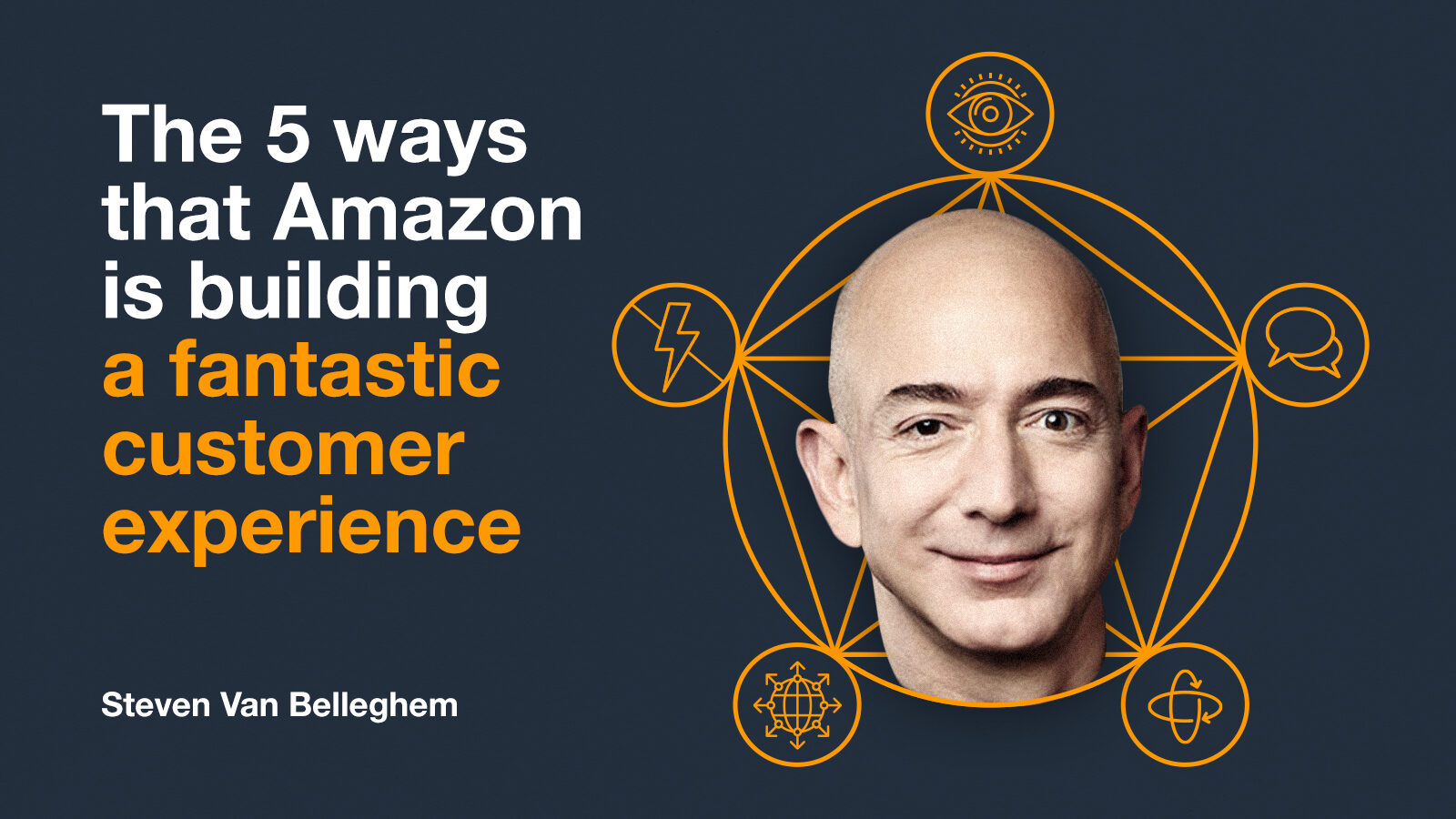 Build a strong vision & stick to it

In every Annual Report, Jeff Bezos wants a copy of his 1997 Letter to Shareholders attached. That’s the one in which he clarifies the Day 1 mentality that lies at source of Amazon’s success. It’s supposed to be both a culture as well as an operating model that puts customer obsession, a long term focus and permanent innovation at the centre of everything that the company does.

This customer obsession and working backwards from their pain points to drive useful innovation has been the company’s North Star from the get go. Day 1 is about being constantly curious, nimble, and experimental. Asked about Day 2, Bezos once answered: “Day 2 is stasis. Followed by irrelevance. Followed by excruciating, painful decline. Followed by death. And that is why it is always Day 1.” It’s this hypervigilance about staying true to the original vision that drove Amazon where it is today. 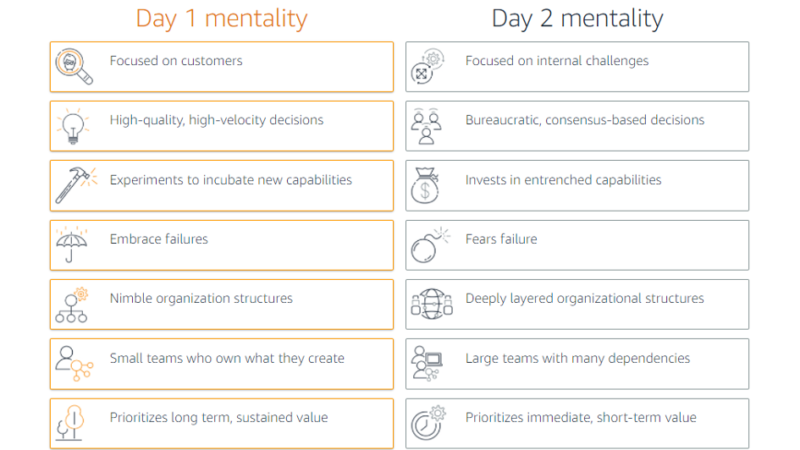 Building a strong vision and staying true to it definitely is not the same thing as staying true to your core. Because Amazon is notorious for venturing into new industries that have nothing to do with its original business of selling books.

Long before it became fashionable to diversify your business and enter new markets, in 2002, Amazon launched on-demand cloud computing platforms and APIs via AWS. Few people believed that this was a good move back then. And yet, since 2017, AWS owns a dominant 33% of all cloud services. Its closest competitors are Microsoft Azure and Google Cloud who have 18%, and 9% respectively, according to Synergy Group.

And since then, it has never been content to stay in its lane, launching services for payment (Amazon Pay, Amazon cash, Amazon Prime Visa), small business lending (Amazon lending), food delivery (in partnership with Olo), pharmaceuticals (acquiring PillPack), healthcare services for employees and family, media (Prime Video) and more.

Amazon is always at war with friction. It understands that friction is the biggest enemy of its relationship with customer and does everything to eliminate it. So much so that the purchasing process almost becomes invisible.

The examples here are legion. We all know its concept of one-click shopping, of which it even owns the trademark since 1999. The subscription model for repeat purchases like toiletries and diapers is another example. As are the Amazon Dash button (discontinued in 2019), Amazon Pay, voice-activated shopping on Alexa and the Amazon Go stores.

Removing any type of friction is always the best way to improve the customer experience. That’s why I advise my customers to appoint “friction hunters” in their company. Watch this video where I explain the concept.

Amazon is the absolute top example of the hybrid approach. It’s not just the “Everything Store”, it’s just as much the “Everywhere store” because that simply is where its customers are.

Since Alexa, it’s become this always on, always available presence in many households, just a voice command away. But it doesn’t just want to be everywhere online. It just as much understands the power of offline contacts, entering the brick and mortar business with Amazon Bookstores, Amazon Go and the purchase of Whole Foods.

Amazon also operates more than 175 fulfilment centres around the world in more than 150 million square feet of space, the majority located across North America and Europe. If you want to offer fast and cheap delivery, you need a lot of warehouses. No surprise that it’s currently heavily investing in adding more warehouses and growing its fleet of airplanes, trucks and vans. I only think that finding a sustainable balance here will be quite a challenge.

Use storytelling to educate employees

If anything, Amazon is a master at storytelling: true to its vision and strategy, it’s been known to find concepts that stick and then repeats them until every last employee, customer and partner knows about them.

Instead of saying something generic like “we really care about customers”, it talks about Customer Obsession, the Day 1 mentality mentioned above and providing an empty chair for the customer in board meetings so that (s)he will always remain at the centre of every decision. It also seems to love powerful little lists like the Leadership Principles(featuring Customer Obsession at the top, obviously) or the 6 Customer Service Tenets (No surprise that “Relentlessly advocate for customers” is the first one). And let’s not forget about the “One Way Door – Two Way Door” decision making processes or the importance of keeping teams to the size of “Two Pizzas”.

It’s great PR of course (there’s a reason why they are mentioned here) but above all, it’s about relentlessly repeating and engraining your company vision in the heads of employees so they feel, breathe and act according to them. If you want everyone in your company – especially if it’s a large one – to be on board with your vision of customer obsession, just use great storytelling. And keep repeating the stories over and over.

So, that’s it. I hope that Amazon’s CX approach will be able to inspire you. And let me know if I forgot any important points.