The last quarter of 2018 gave us a big clue about the next moves of the world’s biggest tech companies in 2019. Their organic growth is clearly slowing down, for one. So, in order to keep their momentum, they will reach out to new industries through some very strategic investments and acquisitions. As per usual, it’s merely a question of them following the money, and that should give us a good indication of those sectors where the biggest opportunities will lay for this year. 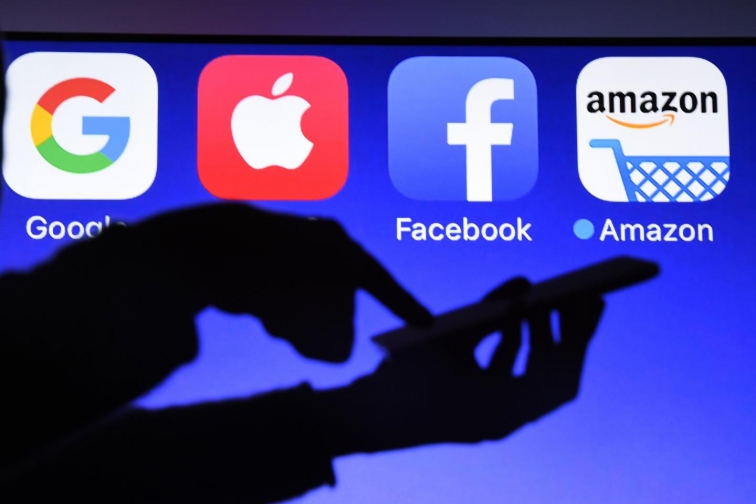 A big booming investment market will be that of the payment industry. Let’s face it, until now, banking and finance has remained relatively sheltered from disruption, but the tech giants are increasingly venturing in that area too. China’s Alibaba and Tencent have obviously acted as real pioneers in this segment: with contactless, mobile and in-app payments quickly overrunning cash and payment cards. They are not content to stick to their local market, though. Just think of Ant Financial’s Alipay that has been entering 20 countries across Europe, signing deals with numerous banks and digital wallets companies.

No surprise that Facebook has become inspired and is launching a Whatsapp payment service in emerging market India, on top of its more recent Messenger payment functionalities. The question here remains if people will feel comfortable with Facebook handling their money, after their trust has been breached during the Facebook Analytica scandal. Very curious to see what happens there.

Traditional banking players are not oblivious to these evolutions at the edge of their market either and they too are investigating new ways of payment through mobile and wearables to keep them from becoming ‘dumb pipes’. Just think of BNP Paribas Fortis’ alliance with Apple Pay and Belgian bank KBC’s recent experiments with wearables.

This is truly a pivotal and very exciting time for payment players, and those from adjacent markets. All of them recognize that they have to move now, and fast: in a few years the battle will have been fought and only a handful will remain to dominate the market.

This is one of the most exciting fields of 2019, where I expect major changes. Last year, I predicted that Apple could very well buy Netflix or Spotify. Though it did not happen, I still see this is a very real possibility. The reason is China. When I was guiding my company nexxworks’ Day After Tomorrow Tour China last year in June (we’re going again this year), I was truly impressed with the holistic thinking of the Chinese content models: both Alibaba and Tencent do not just produce a lot of content, cleverly keeping their IP inhouse, but they have their own distribution channels. The US content ecosystem is a lot more scattered: Netlix is a powerful platform but – owning only a fraction of the IP of its content – it dangerously depends on its partners. Announcements like Disney studios that will stop releasing their movies on Netflix, only underline the fragility of Netflix’ current leadership position. Disney, on the other hand is ripe with content and IP but lacks a popular distribution channel, though its recently launched streaming service might very well challenge that. Facebook, Apple and Amazon too lack the ‘magic’ mix of content, IP anddistribution. So I expect we’ll see investments and acquisitions in that area for them.

Despite Alibaba & Tencent’s leadership position in content distribution, they too are not safe from disruption. Fast-growing Chinese challenger Bytedance’s hugely popular media platform Toutiaou and short form content provider TikTok are out to eat their cake, which will necessitate Alibaba and Tencent to make huge investments if they want to stay on top of the market.

Advertising of course remains the core business of many big tech companies. So, it should not come as a surprise that this domain will remain a key focus for the coming year. Digital marketing platform Ali Mama, for instance, persists as Alibaba’s biggest cash cow and the latter will definitely keep investing and acquiring in that direction. Bytedance’s content platforms TikTok and Toutiao, too, are masters at buying and holding people’s attention though machine learning: we’ll surely see some further endeavors in the advertising category if their élan continues. The potential is huge, if you realize that Chinese readers spend an average of 78 minutes per day on Toutiao, compared to Facebook’s ‘mere’ 66 minutes per day. And let’s not forget about Tencent. Though advertising is still a relatively small business for the internet company – compared to its gaming or streaming revenue – it will very probably make investments in this area to support its further growth.

Though there is little further expansion possible for Facebook when it comes to wall advertising, the tech giant is permanently on the lookout for other channels to monetize: we’re noticing careful efforts in the direction of Messenger advertising and 2019 will definitely see the use of direct ads in the WhatsApp status feature. And let’s not forget Amazon which has now become the third biggest digital ad platform in the US, after Google and Facebook. Its ad business is now growing fast-paced at a rate of 50% per year, even 123% in Q4 of 2018. Without doubt, Bezos will keep driving this expansion with surprise investments in 2019 in that area.

Now that mobility is moving away from engineering and evolving into the realm of software, big tech companies will keep investing and acquiring in that area. Amazon, Microsoft, Google, and Apple are all partnering up with start-ups in mobility services, autonomous driving, vehicle connectivity, electric vehicle technology, and auto commerce. As CBInsights recently wrote, each of them has their very own focus: Google prioritizes autonomy and shared mobility, Apple pivots from full vehicle design to self-driving software and battery tech, Amazon focuses on autonomous logistics and aftermarket parts retail, while Microsoft leverages strength in cloud computing for the connected car. Facebook is actually the only one of the US players snubbing the auto space. Could this be another sign of the Facebook empire losing power: clinging to its core business and failing to recognize that the application market is where future growth will remain strong for the coming years?

In spite of the enthusiastic investments of the US market, China definitely dominates the EV market, as it both produces and sells a lot more of this type of vehicles. This obviously has to do with the many incentives of the Chinese government, which the US and the EU governments fail to match. The US still dominates the autonomous driving market, though. So I’m really excited where this race for the future of mobility will land at the end of 2019.

Healthcare will certainly take a leap in 2019, under the influence of the big tech investments. This evolution became blatantly clear over the past few years. The Apple Watch health kit, for instance, is a true-blue healthcare product, with an FDA-approved cardiogram. Amazon is firmly looking in this direction, too. Just to give one example: the Amazon Alexa team is collaborating with Omron Healthcareon the first-of-its-kind blood pressure skill. Google is one of the most active investors in healthcare start-ups with for instance a big investment in Oscar Health in 2018.

But here too, I believe that China will dominate the market. The reason is that data is the fuel of healthcare innovation, and that they have a lot less ethical barriers when it comes to experimenting with its usage. The same goes for the Chinese experiments with CRISPR – HIV-resistant twins, to name just one example – which seem to be bound by less confining rules and laws like in Europe. No wonder that China leads the world when it comes to advanced healthcare publications.

The sweet spot of technology, data and healthcare will prove to be a goldmine and the big tech leaders are always the first to follow the money. Just like in the finance and banking industries, though, traditional players like GlaxoSmithKline – though its deal with 23andMe for instance – are partnering with disruptors to fight for market domination against the tech players.

Last but not least, one of my favorite sectors, the retail industry, will fuel some major investments from the big tech organizations. Obviously, they will keep on closing the gap between online and offline with running acquisitions – like Amazon and Walmart – that will feed the rise of offline digital platforms like Alibaba’s Hema stores or Amazon Go.

Above all, though, we will see the birth of giant retail ecosystems that have the advantage of scale, talent attraction and capacity needed to thrive. Where competition used to take place between retailer A and B, the war now goes in between the different ecosystems. Many US retailers have extended their partnership with Instacart, a front-end e-commerce solution for grocers. Walmart opened up a collaboration with JD.com, which was founded by the Chinese Tencent, as well as setting up a retail partnership with Google Home to compete against Amazon Alexa, and investing in Flipkart from India. Kroger found a Chinese partner in Alibaba to do the same. Amazon is partnering with Monoprix. Tencent has a share in Carrefour. Google has an e-commerce partnership with Carrefour. 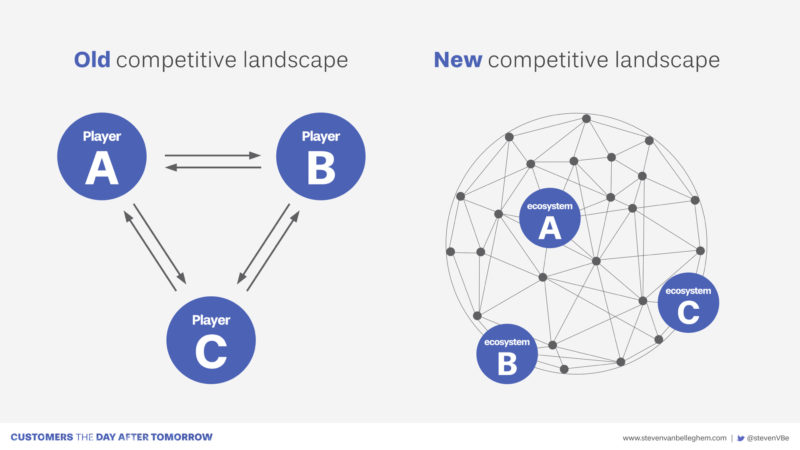 These evolutions will drive some of the hardest conundrums for current day retailers: fight on your own, keeping the direct relationship with consumers and their data OR join ‘the enemy’ and pay the benefits that follow from that with the loss of a true customer relationship. Chinese companies seem to prefer the ecosystem approach while Europe seems to favor the individualistic standalone approach. The US, in its turn, goes for a mix of both. This flocking together of complementary and even competing players is happening in a lot of industries, right now. You can already see the same evolution in media, content and automotive, and I am sure others will follow.