Five things that robots can’t do but people can

Last summer I went through a robot phase. I bought a robot vacuum cleaner, a family robot and a drone. They are all great fun. And they reflect a growing trend: you can't open a trade journal nowadays without reading about the increasing popularity of robots. The automation of many existing processes is taking place at top speed and many people are rightly worried about whether or not they will still have a job in a few years' time. Some visions of the future see almost no place for people at all. We end up in a scenario where we either spend all day lying in a hammock, being waited on by robots, or else we are being exterminated by the Terminator and his friends! 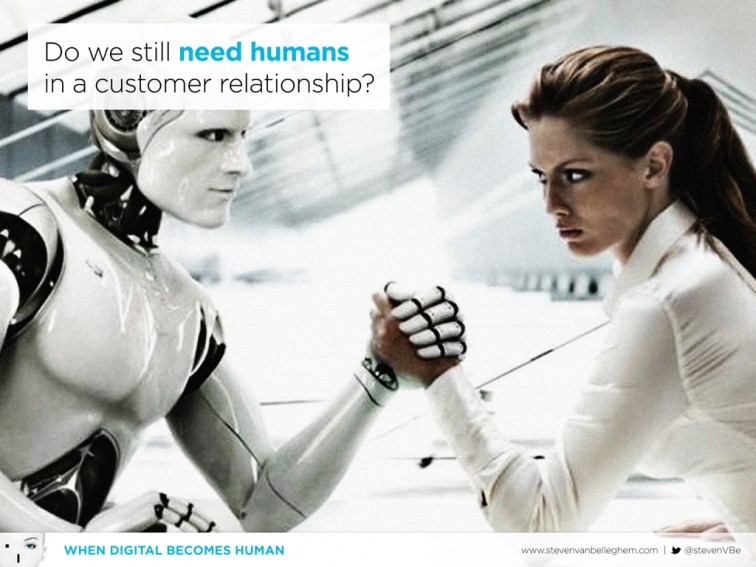 Yet the truth cannot be denied. Robots have already been replacing people for years and this will happen increasingly in the next decade. But this does not mean that people will no longer be important in the world of business. In my new book, When digital becomes human, I discuss both the digital transformation, as represented by robots, but also the human interactions that indispensible to the modern customer relationship. Both these aspects are crucial, but at the present time we are talking too much about robots and not enough about people. Two out of every three consumers attach great importance to the human touch. Nobody thinks that this human aspect is unimportant. 73% still want human contact with the companies they deal with, even if the digital channels are working perfectly.

In this article I want to highlight a number of examples of things that people can do for customers that robots will be unable to do for at least the next 20 years – and probably longer.

And check out this short movie, it summarizes this blog in a few minutes:

A computer will carry out a process in accordance with the instructions it is given. This means that the process will always live up to expectations. But people are capable of exceeding expectations in ways that computers cannot. Depending on the context, human operatives can sometimes see opportunities to do a little something different or something extra that can give a real boost to the customer relationship. The reverse side of the coin is that people do not always live up to expectations. This too can lead to emotions – but not always positive ones.

An operative who sees that a particular order is urgent and works a couple of hours longer to ensure that the customer receives his delivery next morning is a good example of how people can exceed expectations in ways that computers cannot.  Adding an unexpected ‘extra’ to a delivery – some free samples, perhaps – can also have the same effect. In the future, many processes will be carried out by robots, but spontaneity and initiative will remain exclusively human characteristics. 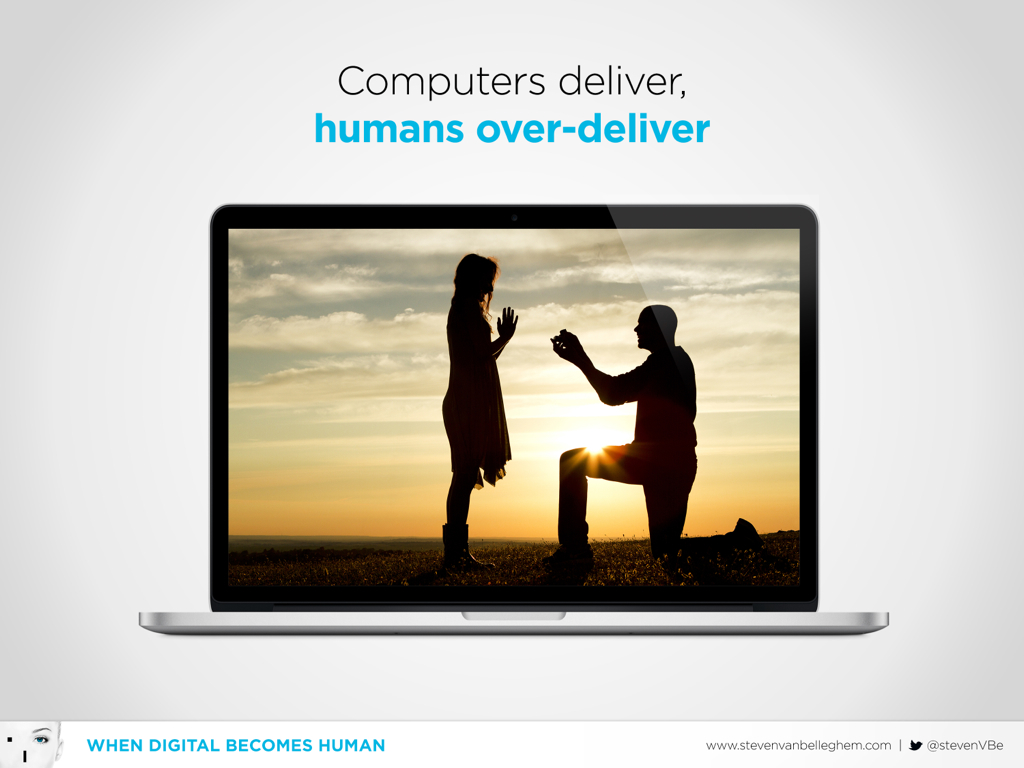 2. Machines can personalize, but only people can make it personal

A computer has the ability to personalize all the elements of the customer relationship, but only human staff can make that relationship truly personal. A waiter who calms your crying child with a smile and a joke. A salesman who shares in your enjoyment at purchasing a new car. A call center worker who sends you a flower to thank you for your understanding during your recent telephone call. These little acts of empathy are built into the genes of some people and they are always appreciated by others – especially customers.

Being able to empathize with the position of the customer forms the basis for a strong emotional relationship. 92% of customers want the company operatives they deal with to show understanding. Sympathizing with an angry customer can often work wonders. Sympathizing with a distraught customer has impact. Being openly happy for a customer creates a bond. People want to share their emotions, even with the staff of the companies they are dealing with. If someone wants to buy a new car, for them this is a really special day. For the car salesman, it is just another day at work. But the salesman who can contribute to the euphoric feeling of his customer will create a bond – a bond that has a bigger chance of leading to a sale. The salesman who goes about his task in a ‘routine’ manner is more likely to miss out – and will also have less commission at the end of the month. 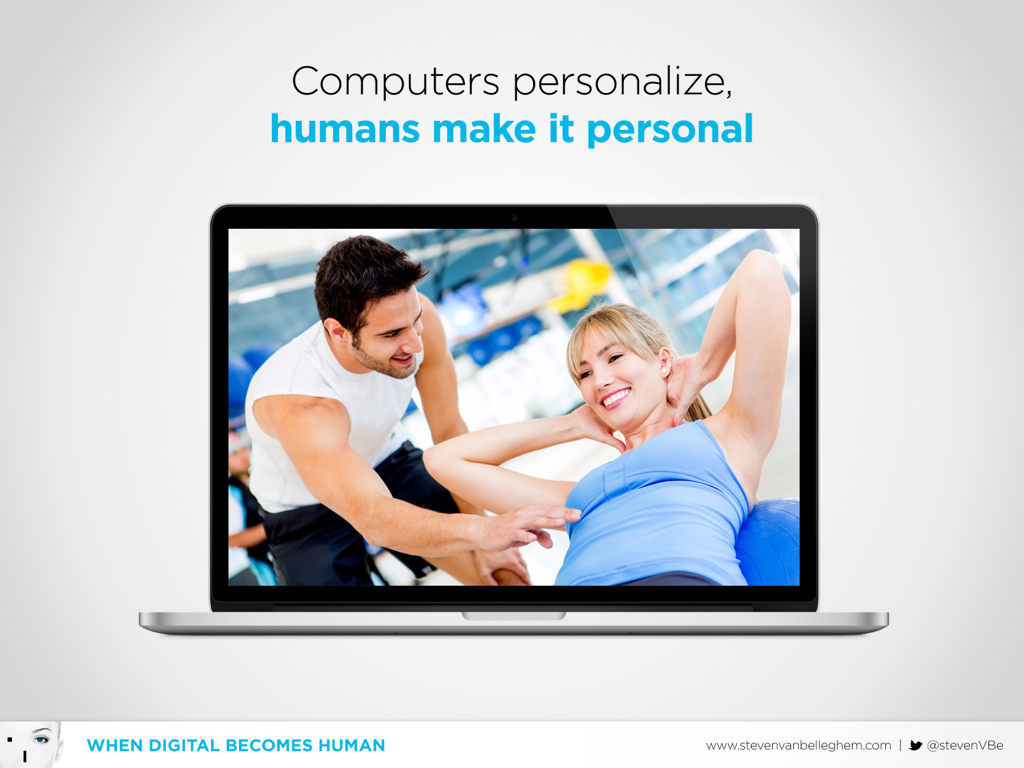 3. Robots are good at routine things, but cannot innovate like people can.

Machines are excellent at carrying out routine tasks, but only people can ‘think out of the box’. In the future, it will be perfectly possible for a computer to draw the plans for the design of a standard house or apartment building. But the creation of a new living concept will always require the skill and vision of an architect. And the computer has not yet been invented that can invent another computer. Innovation will remain a uniquely human talent with a unique value for the customer relationship.

People attach great importance to creativity. For example, they are willing to pay huge amounts of money for celebrated works of art. The cost of tickets for Cirque du Soleil show that people are also prepared to give a little extra to see something different. In a Michelin star restaurant you not only pay for the quality of the food and the service, but also for the creativity of the chef. During the annual advertising festival in Cannes, it is never a computer that wins the prizes. This festival is the high mass of creativity in the communication world. Each year there are new gems to be admired. And it is always the advertising that manages to touch the emotional, human chord of the consumer (and jury) that walks away with the prizes.

In ‘The second machine age‘ the authors emphasize that present-day computers do not possess creativity. They cannot create anything new. Some managers fear that the ‘big data’ hype will limit their own right to be creative. But it is precisely the other way around. Big data needs human creativity before it is capable of giving added value. The data alone is worth very little. It is the way creative people use the data that generates innovation and added value. Without human creativity, the best that data can do is to assist in the optimization of whatever already exists. 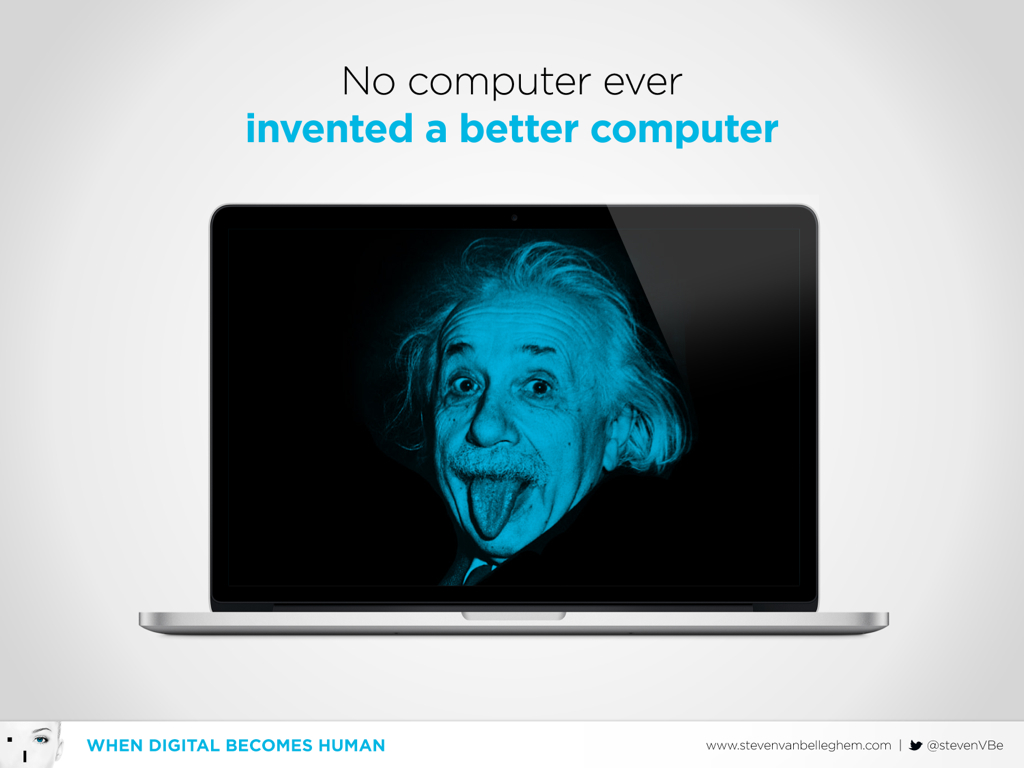 4. Computers can predict, but only people can surprise

Algorithms are getting systematically better. This means that computers are now excellent at predicting customer behavior. But people are still better at pleasantly surprising those customers. Computers have also turned product launches into a science. ‘House of Cards’ was a huge success thanks to the predictive power of big data. When new films are launched, it is possible to assess the likely turn-over on the basis of the first day’s tweets. The predictive power of computers is getting better all the time. Thankfully, it has not yet become an exact science. During the 2014 World Cup, the data guru Nate Silver predicted that Brazil would win. According to his analysis of the scenarios, the host nation would easily triumph over Germany in the semi-finals. Unfortunately, the Germans won with a record 7-1 score!  Perfect proof that people still know how to surprise! Modern consumers have a kind of love-hate relationship with surprises. On the one hand, they would prefer not to have any more surprises at all. Before a person books a ticket for a concert, they will check everything online and even watch the music to be performed on YouTube. And it’s the same for restaurants, hotels and a hundred and one other things. Likewise, we conduct hours of research before we decided to buy something, just to make sure that we are ‘doing the right thing’ and that there are ‘no unpleasant surprises’. On the other hand, we still love positive surprises. We hope that there is something more to experience than what we have seen on YouTube or read on Booking.com. And often there is – but this is only thanks to the kindness and ingenuity of the staff you meet when you get there. Computers are logical machines; they cannot do things that are ‘unexpected’. But people can – and they do. It is one of the unique qualities that makes us human. 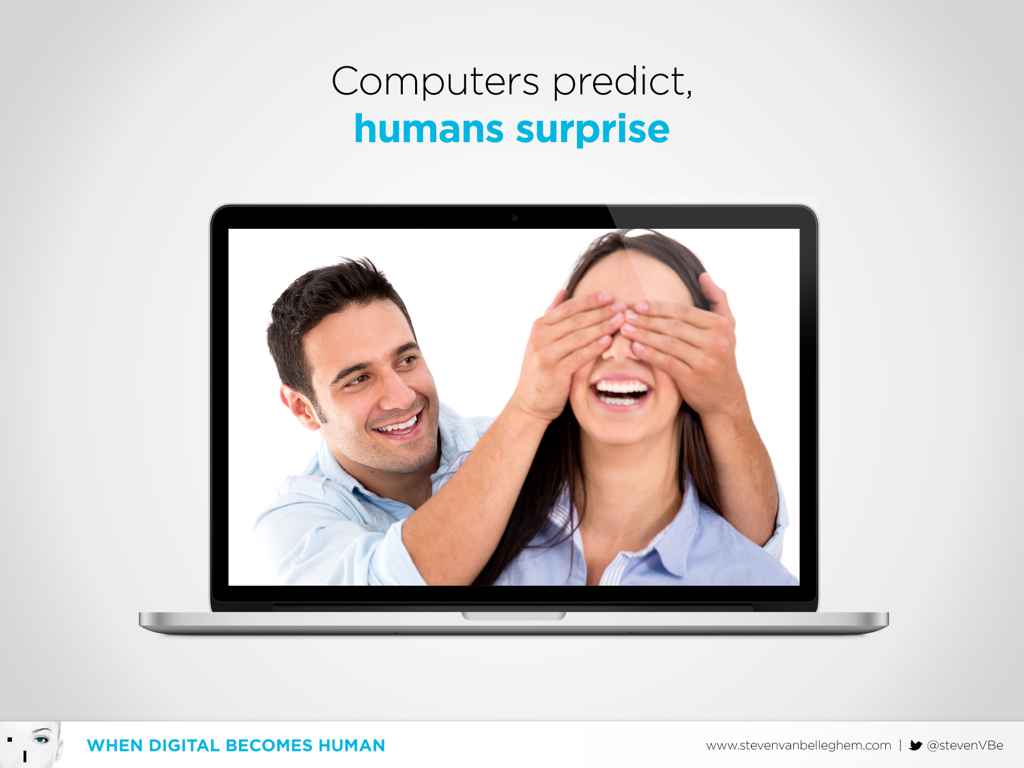 Computers confirm sales, orders, errors and repairs with relentless efficiency. But only people can give a smile that says ‘I understand’. Amusing and entertaining situations are created by people, not machines. I will never forget one visit I made to a Shell petrol station in Amsterdam. I was stood in the queue, waiting for my turn at the cash desk. The customer in front of me spoke no Dutch and wanted to pay with his credit card. It was a credit card without a pin chip. In other words, he had to sign to make the payment valid. Suddenly, the Shell cashier said in English: ‘I’m sorry, sir, I didn’t recognize you earlier. We don’t often get famous people in here.’ I was surprised and tried to see who this famous celebrity standing in front of me might be. But the man himself was as surprised as I was.  ‘Could I have your autograph, sir?’ continued the cashier. And with that he pushed forward the credit card slip that the man needed to sign. The customer grinned from ear to ear and everyone in the shop burst out laughing. ‘That why I do this job,’ the cashier told me when it was my turn to pay. ‘A smile on the face of a customer is the best reward there is.’ I can’t somehow see a computer saying that. 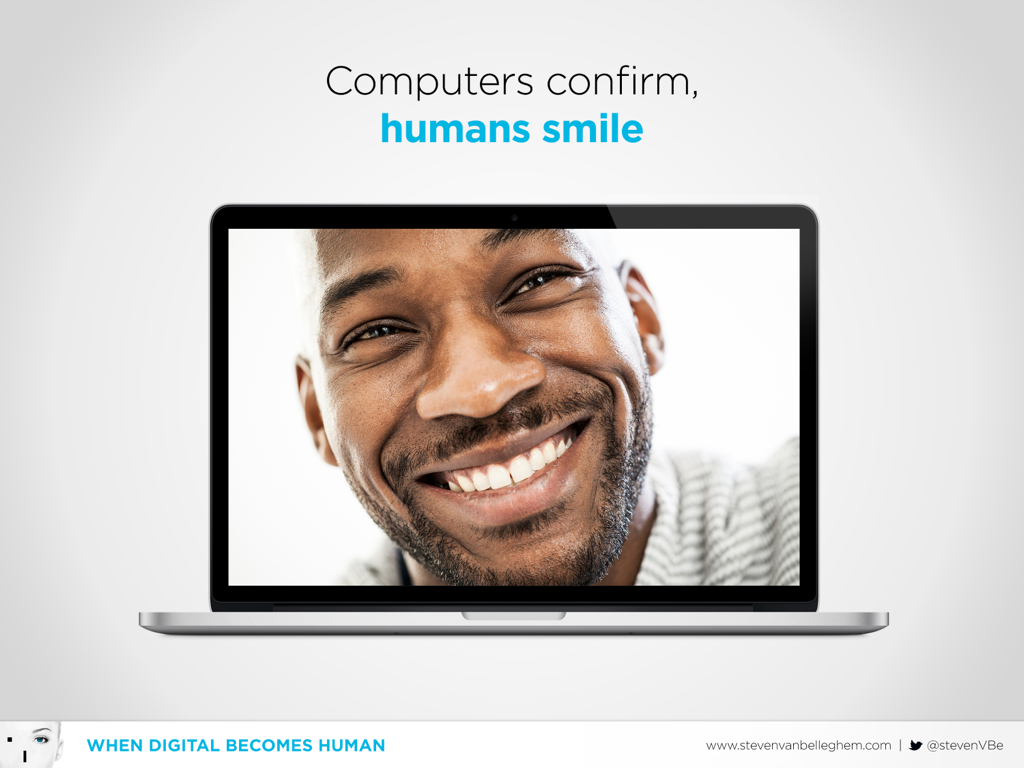 The left and right-halves of the brain

Computers are evolving quickly. They can analyze data much better than humans. But future predictions about computers only talk about the optimization of rational thought processes. In terms of emotion, computers are still nowhere. People have a right brain-half; computers don’t. Whether as a person, employee or leader, it is important to develop this right-hand side of your brain. Computers might be able to beat us at rational tasks, but they can’t beat us at creativity, empathy and passion!

During the next few years many companies will be asking themselves this question: at what phases of their contact with consumers can the intervention of human staff really make a difference. This will require an explicit choice to be made: where do we use robots and where do we use people?

This choice can best be made by making a clear distinction between the rational and emotional elements of the customer relationship. Of course, some phases of the purchase cycle combine both rational and emotional interactions, so that an absolute distinction is not always possible. But by carrying out this exercise it should still become clear where your ‘human touch’ can best be employed.