One of the things I write about in my brand-new book ‘The Offer You Can’t Refuse’ (you can order it here) is that companies that want to keep themselves relevant will have to move beyond ‘just’ ensuring a smooth customer journey and start to cater to the life journey of their customers, truly making themselves an unavoidable ‘Life Partner’ for them.

In my book, I describe the strategies you can follow to become such a Life Partner. One of the most effective is where companies leave the comfort zone of their core offering to really start solving the entire problem. Like Dutch insurance company Centraal Beheer, for instance, that offers the service of selling ànd installing smoke detectors and other types of in-house chores so that their customers can comply with the requirements of fire insurance. Often, these types of ‘leaving the core to solve the whole problem’ adventures, result in the venturing into and blending of different industries. Today’s post wants to offer inspiration around that approach, with 5 companies that are crossing industry lines to offer better experiences to their customers. 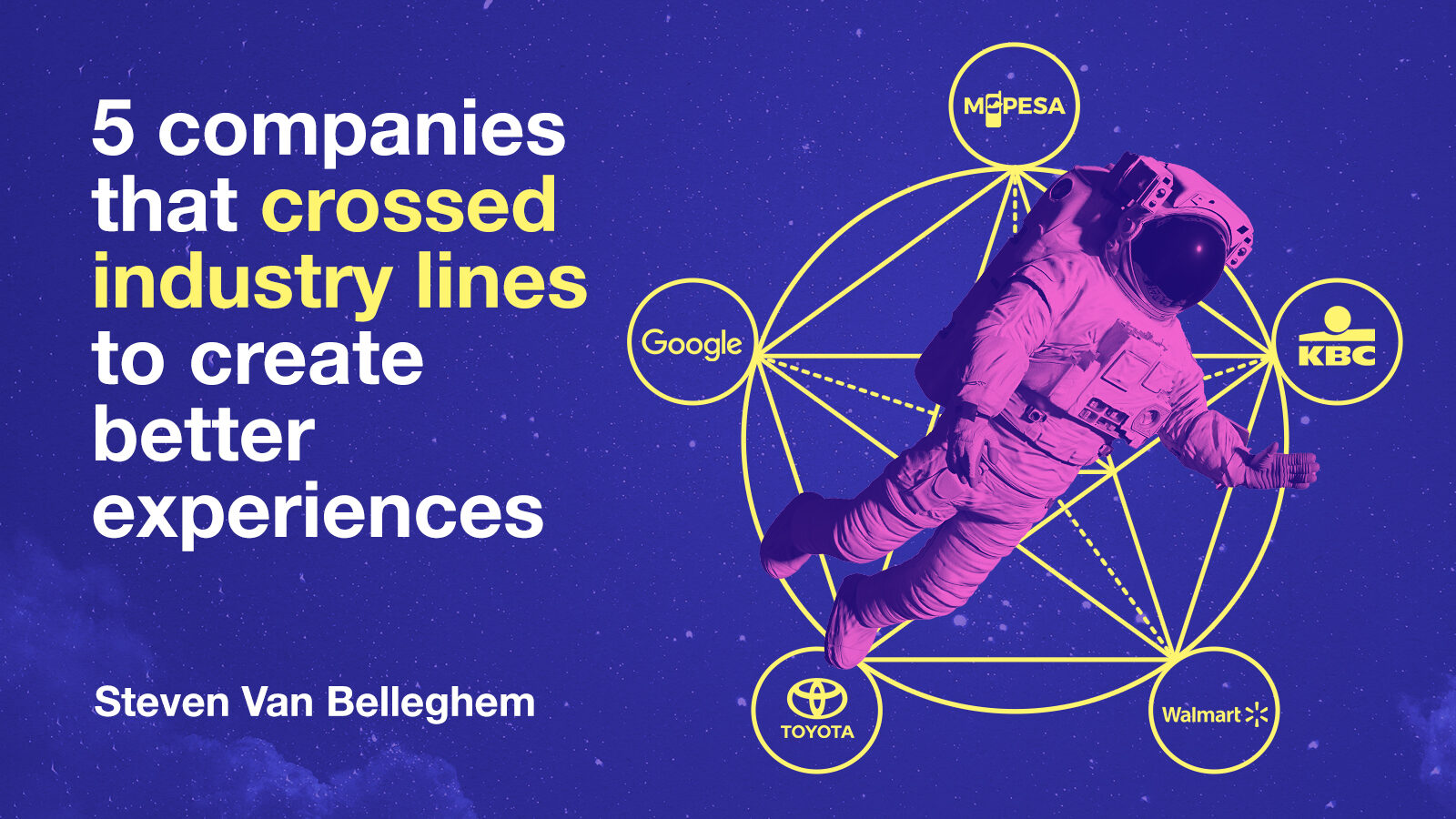 Crossing the industry lines to better cater to your customers may be gaining in popularity, but the approach is not new. One of my favourite ‘historic’ examples in the matter is in fact just as relevant for the ‘Saving the World’ strategy as described in The Offer You Can’t Refuse as for the ‘Partner in the Life’ strategy: telco companies Vodafone and Safaricom launched M-Pesa, a mobile-based payment service targeting the un-banked, pre-pay mobile subscribers: it allows users to send and receive money through its agents, who act as “human ATMs.” It was started as a public and private sector collaboration in 2005 in Kenya on a pilot basis, the full commercial launch was initiated in 2007 and it has since expanded to Tanzania, Mozambique, DRC, Lesotho, Ghana, Egypt, Afghanistan and South Africa.

M-Pesa Vodafone and Safaricom cleverly understood that many Africans still lacked bank accounts as well as credit or debit cards. On the other hand, mobile phones have penetrated the African market, and in countries such as Nigeria and Kenya, the majority of people have a workable phone. M-Pesa is not just about offering a better experience to the customers of Vodafone and Safaricom. Their innovation allowed them to bypass one of the biggest problems of 21st century telco’s: the dumb pipe syndrome, where the operator’s network is being used simply to transfer bytes between the customer’s device and the Internet, without ‘owning’ any data or really understanding their customers anymore. M-Pesa is not only a very lucrative business for Vodafone and Safaricom, it also offers them many insights into the African market.

A bank moving into the sports industry

A few months ago, bank and insurer company KBC announced that it would buy the rights to broadcast soccer games via its mobile banking app, showing the highlights of the Jupiler Pro League over the next five seasons. This ‘Goal Alert’ service is free for customers with a so-called plus account (80 percent of its customers). Other customers and for those who are not a KBC customer, the service will cost no more than ‘the price of one cheeseburger per month.’ The question ‘why’ a banking player would venture into the entertainment industry is easily answered: today’s consumer is tired of having 10 different apps for 10 different services. They want everything available in one convenient interface and KBC is willingly complying in that area, with the extension of services in their app that go beyond banking and insurance. In the past few years, for instance, it added the possibility for people to buy train tickets via their app or link their app to parking garages.

It all has to do with offering their customer a better experience but above all it’s a clever step in the quest for becoming a superapp, of which the Chinese WeChat is obviously the best example. The latter not only allows for instant messaging, sharing life events and chatting with friends, it also enables users to pre-order food from a restaurant, book a taxi, get directions on foot, pay for the meal (or send a friend the money), book movie tickets or buy that fabulous dress that’s finally on sale. And all withing the same interface. This means that users spend an incredible amount of time on the WeChat app, which allows the latter to know so much about its users that it can constantly improve its services in order to become even more addictive. If you check the graph below (from WeChat) you’ll understand how interesting the broadening of its services into one superapp would be for KBC. 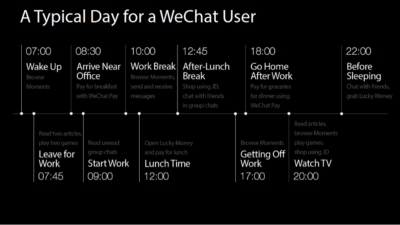 A retailer disrupting the healthcare industry

“Walmart has always existed to help people save money so that they can live better and now we don’t just want to help them live better but live healthier”, Walmart’s Chief Medical Officer Dr. Tom Van Gilder explained about the expansion of Walmart’s healthcare services. It’s a deceivingly simple explanation but rest assured that there is a very astute strategy here, where it wants to centralize as much essential services as possible in its offering. It’s in fact the same clever super-approach as WeChat, but in a different environment.

The idea behind the Walmart Health services is to offer an affordable and accessible alternative for those who need routine medical care, such as a visit to a doctor or a dentist, a health screening, wellness education, or even mental health counselling. So far, Walmart launched clinics in Arkansas, Texas, and Georgia and it is currently planning to open six additional locations around Atlanta and new Florida locations soon. On top of that it also offers free online wellness courses. Just to show how serious Walmart is about providing affordable healthcare, here are all of its services:

The healthcare sector is currently probably one of the most disrupted out there, with many – often tech-related – players out there trying to grab a piece of the pie: Apple, General Electric, Google, IBM, and Samsung to name but a few. It’s only logical, of course, as healthcare data offers so much (pretty intimate) insights about consumers and – even more so in pandemic times – it’s an absolutely essential industry. So Walmart’s move makes a lot of sense. 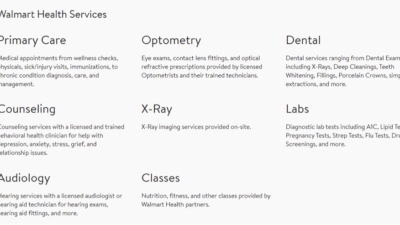 Toyota’s Woven City is expected to appear in 2021 at the foot of Mt. Fuji in Japan. It is building this ambitious “living laboratory” prototype to observe how residents will live and interact with next-generation technology, self-driving automobiles and a broad array of connected devices. Perhaps the most interesting part of Woven City is that it will feature a central “digital operating system” that connects all these smart and autonomous devices. The company managing the city’s operating system will obviously be able to amass a huge amount of valuable data about its inhabitants, so the question as to why a car manufacturer would make such a move is easily answered.

On top of that, it’s a well-known fact that the lifespan of individually owned transportation is ending, so it makes a lot of sense that car companies like Toyota are investigating how they can turn megatrends – like urbanisation, environmentalism, an ageing society, changing mobility, robotics, sustainable energy, autonomy, 5G connectivity, AI and IoT – to their advantage.

An internet giant easing into the education industry

Internet and advertising giant Google recently made a fascinating announcement that could greatly impact the future of work and higher education. It is launching Google Career Certificates, a selection of professional courses teaching the skills needed for in-demand jobs. To start, the programs will include courses about Data Analysis, Project Management and UX Design. In today’s marketplace, having Google on a resume may offer just as much prestige as a university and maybe even more in terms of job skills.

But instead of taking years to finish like in the case of a traditional university degree and – in the case of some countries like the US – costing an absurd amount of money, these courses are designed to be completed in about six months at the cost of a reported tuition of $300-$400. The company said it will also fund 100,000 need-based scholarships for the certificate programs. On top of that and unlike college, Google won’t just hand you a diploma and send you away. The company has promised to assist graduates in their job searches, connecting them with a consortium of over 50 employers such as Intel, Bank of America, Hulu, Walmart, and Best Buy.

The question remains why Google would make this move into the education industry? The most obvious response is to attract smart and ambitious youngsters in the ruthless war for talent that is raging out there. And I’m sure that the close ties it forges with big companies like Walmart, Intel and Hulu are also a bonus here. Last but not least, when it comes to Google, always search the answer in data: offering education in direct to its users, will allow it to understand how people learn and process information better.

I love each of these examples because they’re such a testament to human creativity always finding a better way to solve real problems and making life more convenient for customers. I hope that they inspire you to look around and think about how you can solve “the whole problem” for your customers too. Even if it means moving out of the comfort of your own industry.