7 things we can learn from looking back at 2019

We’re almost at the end of an exciting year and I’ve decided to gather some of my favourite 2019 trends that will keep on resonating in the next few years. It’s clear that the battle for the relationship with the customers is really on.

In the last year, we saw the rise of new customer offerings and interfaces. In this blog, I would like to give you an overview of 7 trends that boosted in 2019 that could have a big impact on customer experience in the next few years.

It’s safe to say that these are especially exciting times. And this is what I’ll personally remember most of 2019: 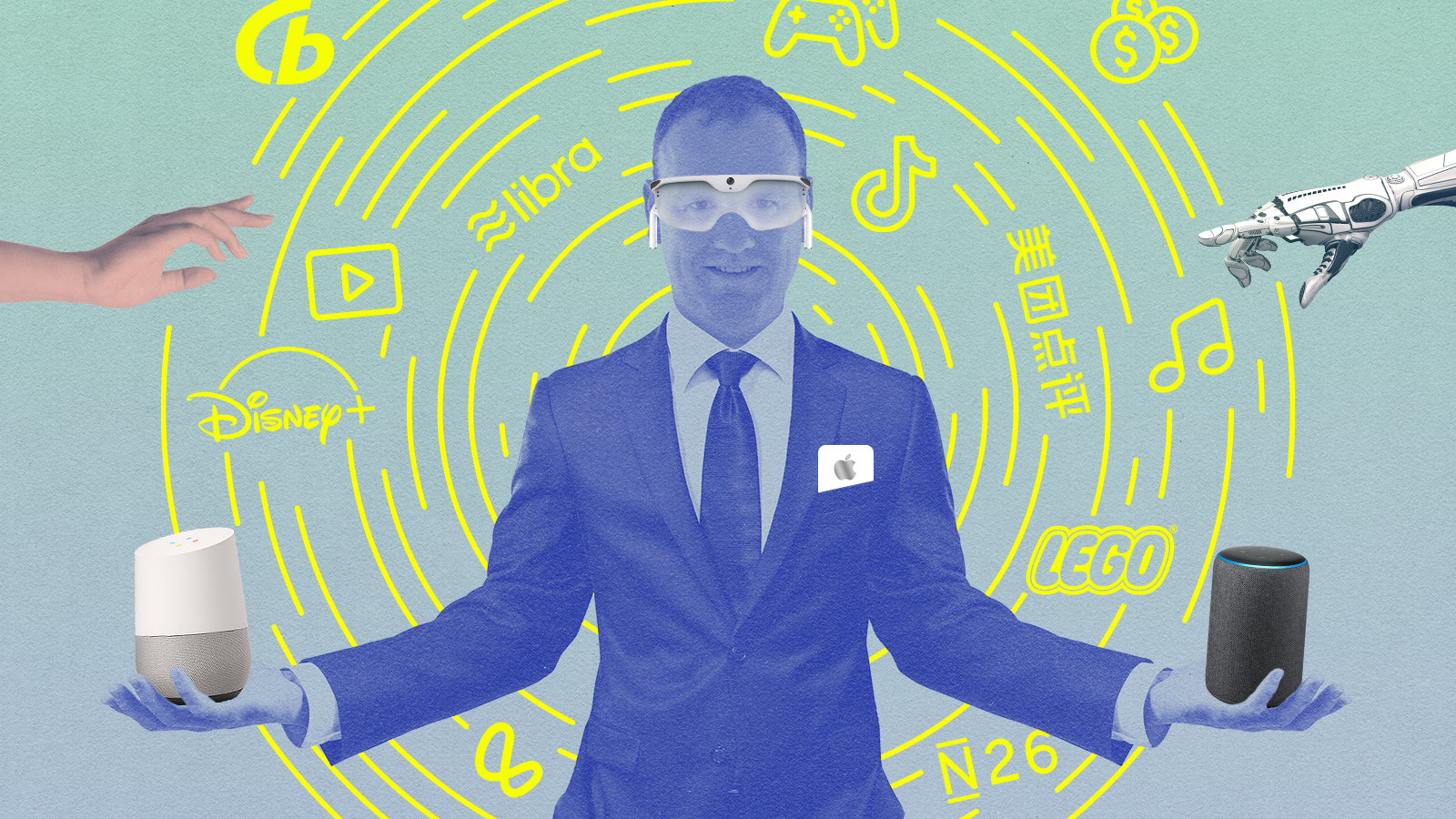 Everything as a Service

Those of you following my Steven’s Weekly on my Youtube channel, will certainly have noticed the trend that a lot of companies are jumping on the service bandwagon. We’re already used to Software as a Service, Mobility as a Service, Platform as a Service and a few others but it’s becoming increasingly clear that this is truly the era of “Everything as a Service”.

One of the most visible examples of 2019 was obviously Apple. As its three big hardware markets – smartphones, PCs and tablets – are stagnating, the company is increasingly looking for other ways to grow its offering: beginning of this year, it added video streaming and news subscriptions and is planning to unveil a similar offering for credit cards.

Apple also entered the game streaming business with Apple Arcade. Google launched Stadia in the same market space. The next few years, gaming will evolve from a single purchase industry to an access to a full library industry.

We’ve also seen several car companies teaming up to offer mobility services on top of their car ‘hardware’: like BMW and Daimler collaborating in that area and Tesla announcing an Uberlike service for autonomous cars. Even IKEA was looking into ways of offering access instead of ownership by renting out furniture and even kitchens.

I’m especially curious about how this trend will combine with automated buying and the subscription economy into a very different way of consuming.

When it comes to the rise of the voice interface in 2019, I’ve noticed two major dimensions. (1) Voice is getting integrated in more and more devices and (2) an increasing of user applications. Amazon, for instance, has been investing a lot in extending the voice capabilities beyond the classical bots, into the realm of wearables like glasses, earbuds and even sensor to detect the emotions of the user. But it’s not just developing these on its own. It recently also announced that there are now 85,000 “Works with Alexa” devices on the market. And let’s not forget the new players like Facebook entering the marking as well. Google, in its turn, is heavily investing in automating and streamlining as many time-consuming processes for its customers as possible: as in the case of Google Duplex making appointments at the hairdressers or even by offering a service that automates restaurant reservations. They really want the Google Assistant to become the primary channel for search. The Alexa Skills Store, too, now has more than 100,000 apps, a number than keep growing exponentially.

To me it seems that the (extended) voice market is currently this huge playing field where a lot of players are building, partnering up and experimenting as much as they can to learn what works, what doesn’t’ and what they need to improve. Voice is an important new interface and it could become the most natural interface for consumers.

We used to talk about offering more convenience and time saving for our customers through the use of tech as something special, but that’s just a commodity now. Successful big brands are increasingly investigating how they can truly become this unmissable partner in the life of the consumer. I’ve seen this time and time again in 2019.

John Hancock for instance partnered with Apple Watch to encourage customers to live healthier lives: they can buy an Apple Watch for an initial fee of $25 plus tax and then earn back their monthly payments if they meet their monthly physical activity targets. US grocery retailer Albertson partnered with medtech company Genomind to make its DNA testing kits made available in its stores so that they can for instance find the antidepressant medication that will work best for them. Another fun example is the Now Brussels app which informs tourists in real time where the tourists and where the locals are eating or drinking so they can choose for an authentic experience above tourist traps. Or there is the beautiful case of the insurer Dutch Centraal Beheer which wants to move beyond ‘just’ insuring and become a ‘Partner in Living’ or a ‘Partner in Mobility’: they for example help their customers install solar panels or assist them with odd jobs in the house.

The pressure on traditional banks kept growing the past year. We’ve seen the rise of the very popular Neobanks like UK’s Monzo (3 million users), Germany’s N26 (3,5 million users) and Revolut (3,7 million users). Now, hot as these may be, their numbers are obviously still nothing in compared to the big banks. Not just when it comes to the number of users, but especially not in the amount of money that users have on their Neobank accounts, which on average is less than with traditional banks. Users are still experimenting with them, while their monthly pay check and savings accounts are still coupled to the traditional players.

And then there’s the fascinating case of Facebook launching the Libra cryptocurrency project with plans to release it in 2020. Announced as a full-blown revolution in global finance, the tides seem to have turned for these past weeks. The Libra project is under attack by world leaders and central bankers worried about its harmful potential: as a vehicle for money laundering, a threat to global financial stability, open to data privacy abuse, dangerous for consumers and stripping nations of the control of their economies by privatising the money supply. Seven high-profile partners in the Libra Association have quit in dramatic fashion in recent weeks, including PayPal, eBay, Visa and Mastercard, as concerns mount.

There’s a full-blown battle going on to control our money and it’s very clear that both traditional banks and governments will do everything in their power to keep the status quo. There are HUGE cultural differences over here and in the US when compared to China or Singapore, which have virtually become cashless societies. Yet in the US, the ‘cashierless’ Amazon Go stores have been obliged to accept cash and the city of Philadelphia, too, has banned cashless stores.

This is one of the most heated battlefields as well as the most poignant question of the last year: who will we allow to entertain us the most? The days that Netflix was the absolute king of video streaming are long behind us. A lot of powerful new players have entered the market. There’s the cheap services of Apple TV, meant to boost the acquisition of its hardware products. There’s Amazon Prime, HBO Go and – one of Netflix most feared competitors – Disney+ which has no less than 60% of stakes in Hulu and has acquired ESPN+ for sports.

Above all, I’m very curious as to how the cutthroat competition between Netflix and Disney+ will pan out. Though Netflix has made a lot of really successful own series and films the past years, it can’t hold a candle to the strength of Disney’s Marvel, Star Wars and Pixar brands and their merchandising. The quality and convenience of Netflix are fantastic, but Disney+ owns the true power brands. It’s going to be a thrilling show-off. It was impressive to see how Disney+ reached more than 10 million subscribers in the first 48 hours after their launch. Disney will, in my opinion, become the second largest streaming player together with Netflix. I can easily see how many families subscribe to both companies their services. Apple and Amazon are strong brands but they don’t have strong brands in their content portfolio, so they are facing a huge investment to boost the awareness of their content. And who knows, maybe we will see an interesting acquisition in this field. Maybe Apple will go after Netflix in the next few years. Who knows.

But it’s not just video streaming, music streaming too, might go through some serious shifts, with Bytedance announcing that it will enter the market, probably causing some sleepless nights at the Spotify HQ. The battle for our eyes and ears is on.

Augmented Reality (AR) is gearing up

We’ve seen time and time again in 2019 how companies dabbled in AR to augment the convenience of their customers. Youtube’s AR ads, for instance, let viewers try on virtual makeup alongside beauty vloggers. Warby Parker launched this really cool app that combines AR and face mapping so customers can try on virtual glasses. Amazon is testing out the use of 3D body scanners to allow customers to virtually try on clothes and shop for styles that are better fitted to their body. Apple announced earlier this year that it is planning AR glasses in 2020 to come alongside an updated 5G iPhone. Lego launched eight new AR-focused sets, part of Hidden Side, a new series of sets designed to skirt the line between the physical and virtual.

Augmented Reality is in its early stage, we are at the beginning of its evolution. However, once it matures, this become a killer new interface in customer interactions. Image the possibilities of on the go personalised content, augmented promotions, how digital reviews could become part of the offline world and so on.

The West has become the copycat now

We’ve known for a while now that China has overcome its copycat years and is now one of the world’s forerunners in (technological) innovation, especially in artificial intelligence. But the last year has shown us that China is no longer content to keep to its boundaries and is steadily entering the Western market as well. Out of ‘nowhere’, Meituan Dianping, for instance, topped the FastCompany’s most innovative companies list. We can learn a lot from the company’s uncompromising obsession with convenience. Western companies often still expect customers to adapt to their delivery schedule while Meituan Dianping completely adapts delivery to its B2B and B2C customers, as it should be. And then there’s the unending victory march of Bytedance’s TikTok which by now has 500 million active users worldwide, 41% of which are aged between 16 and 24 and they spend an average of 52 minutes per day on the app. That’s one Big bite out of Facebook’s audience, of course.

The rise of these Chinese stars is so stellar that the big tech companies over in the US are responding in quite a surprising way: ironically, now they are following in the footsteps of the once so famous copycat nation. Google for instance, bought the US-based video sharing platform Firework in an attempt to compete with TikTok. In the last few months we have seen how Facebook is gearing up for the battle with Tik Tok as they are testing a complete new TikTok lik platform, called Lasso. In Brazil Instagram is testing a new feature in IG stories that is an exact copy of TikTok. Facebook is the copycat in this battle.. The latter is also copying the highly successful Wechat with its Colibra digital wallet and Whatsapp payment experiments. I’m very curious to see this evolve and really wonder how this approach will work.

So, these were my highlights of 2019. What are yours? Tell me in the comments of my social posts. I’m very curious. And stick around for my end of year predictions. I have quite a few in the pipeline, each with very different angles.