New technological developments are also creating new marketing possibilities. Apart from customer centricity and selling without selling, technology is the third key competency for the marketing organization of the future.

Naturally I’m not talking about resorting to technology for technology’s sake. The introduction of technological innovations serves a triple purpose: 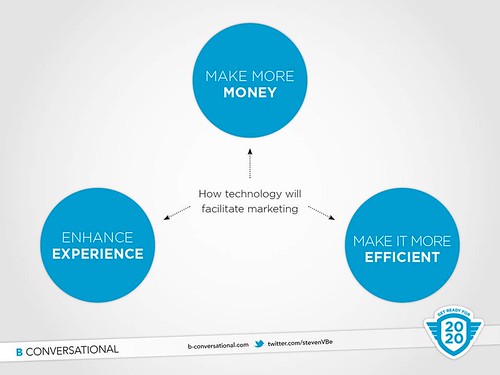 If technology is able to bring something extra to your marketing approach in any one of these domains, then it represents an added value. Technology as a mere gadget isn’t really worthwhile.

Many companies experiment with technology. Sometimes it works out, sometimes it doesn’t. That’s a good thing, really. Trial and error are part of the phase we are currently going through.

In this blog I’d like to share a few cases where technology impacted the relationship between companies and their customers. Feel free to add your own fun examples. You may recall I already discussed several cases a few months ago, so this is actually an addition to the previous article.

More and more companies are experimenting with Augmented Reality. Consumers can use their smartphone or tablet to add extra digital content to the offline world. Recently, Ikea launched an augmented reality app for its customers.

Ikea’s augmented reality experiment aims to help consumers with their purchase decisions. For instance, if you like a particular couch then the new Ikea app will let you visualize it in your own house. Aim the tablet at your living room and you can virtually introduce the new furniture there. It gives customers a better idea of what it might look like.

Navigation systems are fast becoming a standard feature in modern cars. Today, the majority of cars are equipped with either a built-in GPS system or a stand-alone unit. In the future, though, Mercedes would like to take it one step further and they have partnered up with Google to achieve just that.

When you’re ready to go home after a night out, the Google Glass will automatically take you to your car so you don’t have to worry about finding your car in the dark. The app also helps users find their destination on foot if parking is unavailable nearby.

This example is just one of many situations where Google Glass can offer added value to consumers. The glasses provide additional information that can make life easier.

Coca-Cola Israel recently launched a mini-bottle and to support the launch, a mobile app was developed enabling Coca-Cola fans to create a miniature version of themselves. The challenge consisted in keeping your Mini-Me alive as long as possible. Among other things, you could go to the store with your Mini-Me to buyâ€¦ Coca-Cola.

The consumers with the highest scores were treated to an extra special surprise. They were invited to the Coca-Cola factory for a full-body scan, which was used to print a 3D Mini-Me version of the winners.

Coca-Cola made the most of the latest scanning and 3D printing equipment. It’s the first time a major brand explores the possibilities of 3D printing for a marketing campaign.

Pillsbury’s Strudel DÃ¼deler is an American retailer who sells pastries and cookies. Their range includes just about every type of pastry and biscuit you can think of. Until recently the company had no online presence, so they thought they’d promote their social media channels by building a link between Twitter and their pastries.

Users who tweeted the company with the hashtag #StrudelArt received a picture of a strudel with their own personalized icing on top. Later they got to pick up and eat their pastry. This original campaign is a creative way of connecting Twitter with the real world. Of course, this is just a fun experiment and not an earth-shattering campaign. Still, this little technological experiment generated close to 55,000 Facebook likes in no time flat.

Just a short while ago, a German Adidas outlet launched an e-commerce experiment in their storefront. Obviously lots of people walk by the shop when it’s closed. They may see something they like but they can’t buy it because the shop is closed. The Adidas outlet wanted to see if their storefront could double as an e-commerce site. The concept is simple: the storefront is activated through a touchscreen and the selected items can be dragged onto virtual models to see how they would look. Items are purchased via the shopper’s smartphone or tablet. Once the user accesses the app on his smartphone (via QR code), the process is identical to that of other e-commerce platforms. It’s an interesting experiment. This type of application creates new possibilities for the retail business in the digital world.