Centraal Beheer (CB) is one of my favourite companies in the entire world. Perhaps because they seem to defy all the usual challenges that are quite inherent to their sector. Let’s face it, insurance companies are not the most popular kids on the block and – though they tended to score top of their class – Centraal Beheer used to have that very same problem: struggling with a low NPS score. 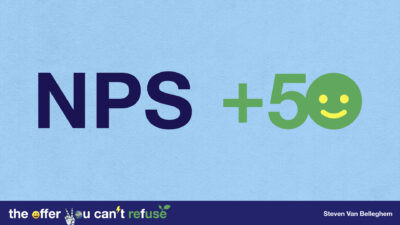 And now, x years later, I sat at the table with General Manager Albert Spijkman, Happy Customer Lead Yvette Stegeman and Branding Strategy Expert Peggy Spaapen to interview them about their progress in the matter as well as their current branding and customer experience strategy. I was more than ever impressed about how they keep putting the needs of consumers first.

You can find the entire conversation on my Youtube channel, but below are the highlights as well.

As you know, I have been writing a lot about the three trends that will drive customer experience in the next 10 years:

It was fantastic to see that Centraal Beheer was working on every one of these three levels. This is how they did (and still do) it:

One of the first things that CB did after the renewed NPS mission was to measure every customer interaction point so they could find out where the customer was satisfied and where (s)he was not. From those parts that had a good NPS, they extracted best practices and from those with a negative one, they found out what caused friction, and then removed it, using agile methodologies. Whenever the NPS score increased, they rewarded those who were responsible. The reason why all of this worked so well, though, is because customer experience has always been part of CB’s DNA. They had always been looking for the best ways to serve the customer, but just needed to look for ways to go beyond what their sector usually did. And, boy, did they succeed.

Obviously, they did everything they could to remove any friction from the customer journey, with all kinds of convenient apps and chats with flawless digital interfaces. But they knew that they needed to match this streamlined digital journey with a warm human service. One of my favourite examples in the matter was the Small Dent Days which they organize 4 times per year: on these days, 10.000 people have the small dents in their car fixed for free while they are warmly welcomed by the insurance agents of CB. It’s the perfect way to create a human relationship with the customers that they otherwise almost never meet in person. And the customers love it, obviously. The warm ‘Forget Me Not’-goodbye letter – filled with forget me not flower seeds – to customers who decide to end their contract is another beautiful example. This is a far cry from the distant and almost aggressive relationship which most other insurers have with their customers.

But to boost the NPS score up to 50, CB knew that they would need to go far beyond the usual call of duty. They would have to move from merely selling a product, to offer real and useful services that would be truly relevant for their customers. I love how they put it: “we want to become a partner in living instead of just selling insurance”. They no longer just take away frictions in the customer journey but they do the same for their customer’s life journey.

A fantastic example is CBs ‘Uber for handymen’ platform Klushulp, where people can hire a handyman for small chores. Because they know that the Centraal Beheer brand is behind it, customers know that they can trust the people on the platform, and they can benefit from a flawless interface and journey too. Since smoke detectors became obligatory in The Netherlands, they also sell them to customers and help them install so people don’t have to figure out which type is compliant with the law, how many of them and where they should be put. CB started to unburden and facilitate the lives of their customers in all sorts of clever manners, moving far beyond the dry but necessary insurance business. They use the expertise, the intelligence and the network that they have gathered in all of their insurance products to create truly relevant services as a partner in the lives of their customers. 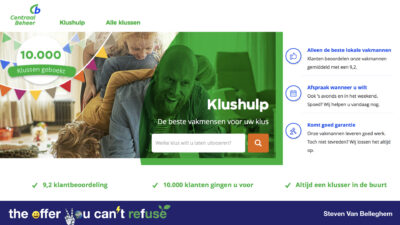 And now that we are moving from the years of authenticity (which obviously remains relevant) to the decade of sustainability, Centraal Beheer too is doing everything it can to respond to their customer needs in the matter. They told me that customers are indeed worried about it, for instance asking for repairing their car in the most sustainable of manners, or if CB is investing its money ethically.

You start to see it in everything they do. For instance, a lot of customers are interested in the instalment of solar panels to choose for a more sustainable form of energy but – from the subsidies to the right placing, material or finding the right partner – they are also struggling with knowing exactly where to start and what to choose. Now, as Centraal Beheer has a lot of expertise in the defects and placing or theft of solar panels, it is now centralizing all the steps towards solar panels to help unburden its customers. And, without having actually launched the product officially, they now have 300 customers, which is a pretty good indicator of the need in the market. 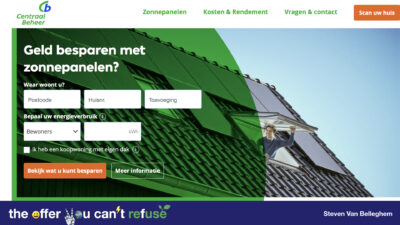 The Centraal Beheer case is a fantastic example of a company taking customer experience to an entirely different level. They prove that you do not have a be a huge international corporate to make a difference for your customers. If you change a lot of small things and keep doing that, you can also help change the lives of customers, and save the world. So let this be an inspiration, and a way to start to think about all the small ways that your company can become a partner in the lives of your customers.