Last week, I introduced my 'Customer First model'. This week, I would love to zoom in on symbols of extremism. These symbols are the proof of your customer centricity. 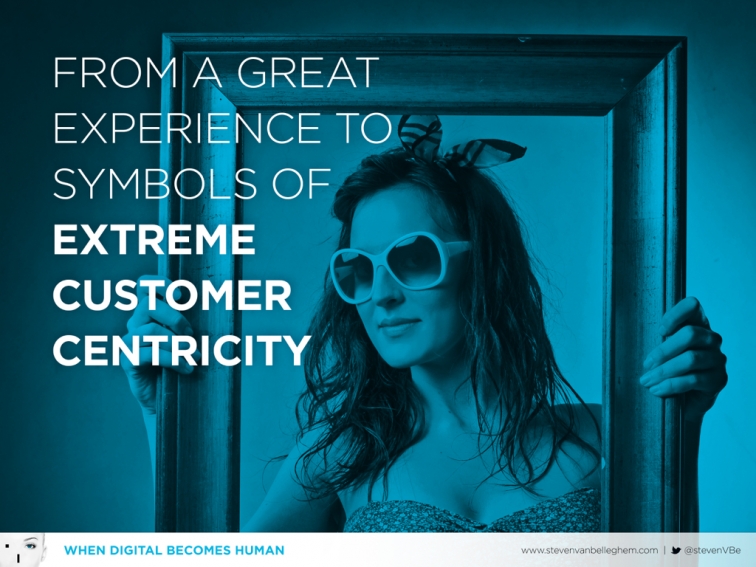 Extreme customer orientation is a matter of details

One of my favorite theme parks is Islands of Adventures, part of the Universal Studios in Orlando. During a recent visit, our eldest son Siebe was not tall enough to go on the wild-water ride. He was just a centimeter too short. He was very disappointed, almost in tears. We were immediately approached by a member of the park staff, who gave him a voucher for a free ride, a voucher with permanent validity. The next time he is in the park, he will be allowed, together with his family and friends, to skip the queues and take his turn on the attraction. What’s more, he was also given a second voucher for a VIP ride on another attraction of his choice, for which he was big enough. Siebe chose the Spiderman attraction and his tears were soon forgotten. These are the kind of details that people remember, providing a positive surprise at an unexpected moment. This is the secret of extreme customer orientation. 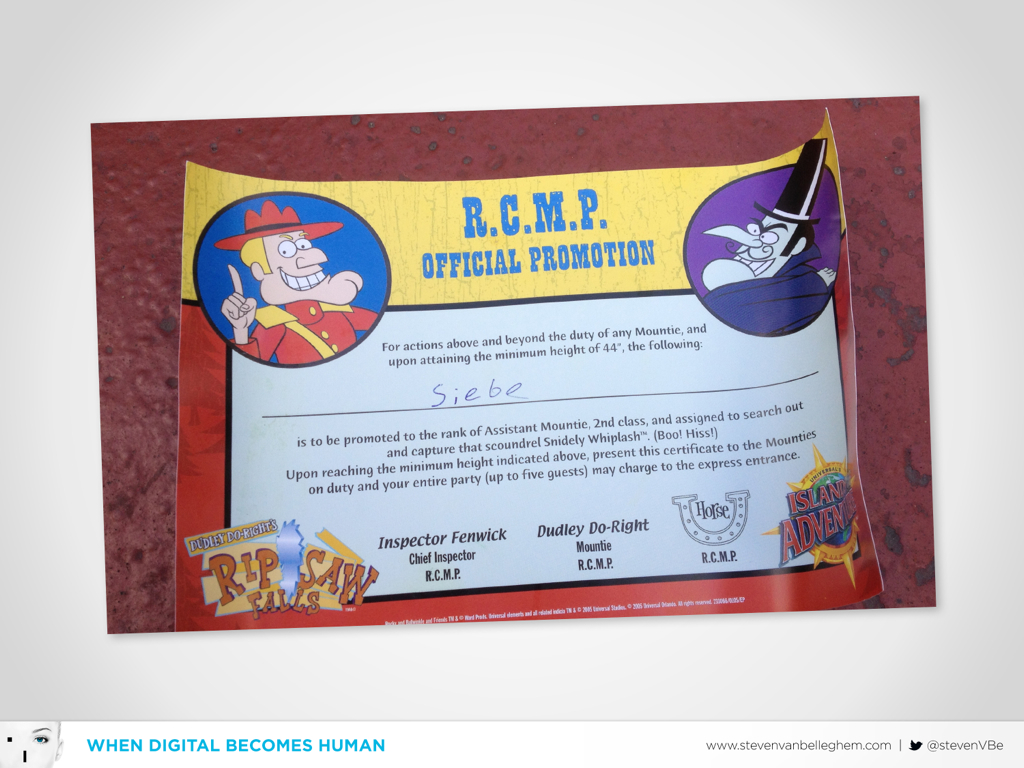 Extreme customer orientation is necessary, even though the word ‘extreme’ sometimes has negative connotations. Extremism is politics or religion often leads to undesirable consequences. But in the customer relationship the extremism is all positive. So why is it so necessary? It is necessary because many companies already use the phrase ‘customer orientation’ unjustifiably or incorrectly. I know of no company that would not claim to be customer-oriented. But very few of them actually practice what they preach. 80% of CEOs think that their company is customer-oriented. Only 8% of consumers agree with them. It is only by an extreme focus on the customer that the fine words can actually be transformed into hard reality.

A McKinsey study has proven that the difference is not made in the classic channels or products. The difference is made between the channels. Most companies will usually have their basic processes and products under control, but may slip up through making errors in the detail. If you look at the nuts and bolts of a company’s customer relations, you will soon see whether or not that company has extreme customer orientation. You can see it, for example, in the manner in which the company deals with complaints. Or you can see it when a company is prepared to recommend one of its rivals, if they are better able to help the customer. A restaurant that is full and suggests good, equivalent restaurants to its potential diners is demonstrating extreme customer orientation.

You can also see it in the degree of flexibility a company is willing to show. The Europa Fun Park only decides at two o’clock each afternoon at what time it will close that evening, depending on the actual number of visitors in the park. If they decide to close at ten o’clock, visitors are allowed to start queuing for attractions up to that time, and the park will remain open until everyone has had their ride. Little wonder that the Europa Park was chosen by Tripadvisor as the most customer friendly theme park in Europe. 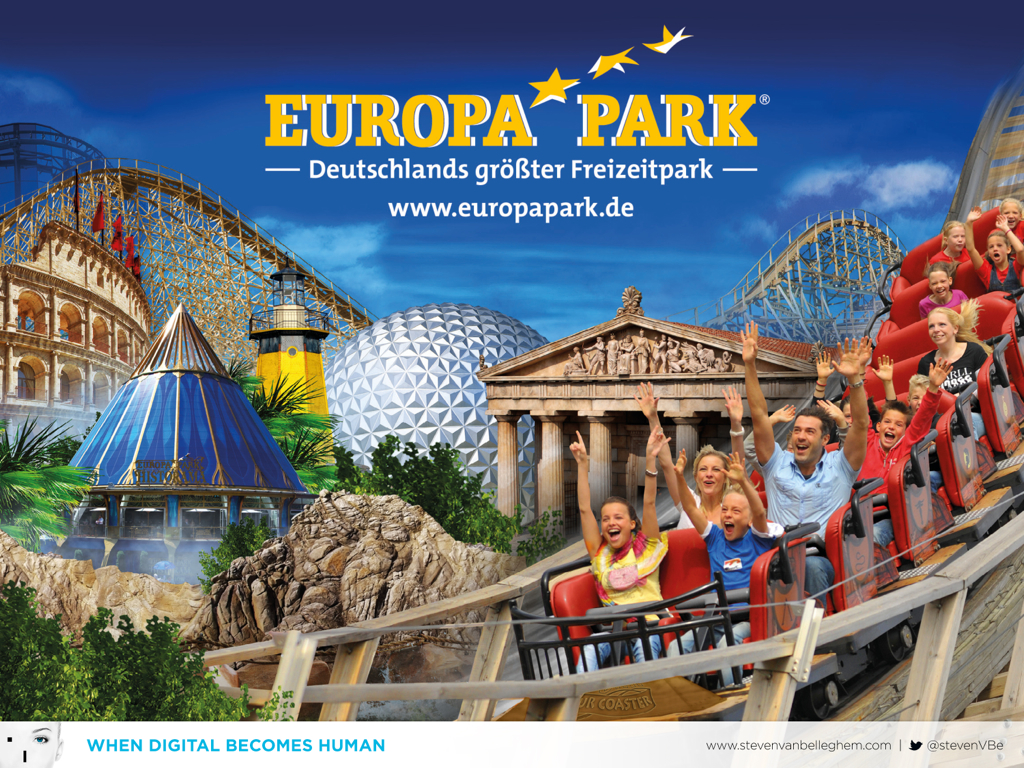 Q-Music, the successful Belgian radio station, is famed for its spectacular listener competitions. On one occasion it gave away a house worth 250,000 euros to one of its winners. Not surprisingly, the winner was in seventh heaven. But this particular heaven soon turned into a hell. The building company pulled out of the deal and work on the house stopped. The dream prize threatened to turn into a nightmare. Q-Music’s slogan is ‘Q is good for you’. The Q-team believes in this slogan and tries to put it into practice. As a result, the station came up with its own solution: Q-Music deposited 250,000 euros in cash into the bank account of the winners, so that they could buy a new house of their choice. This may sound ‘fair’, perhaps even the natural thing to do – but it is far from self-evident. Most companies would probably have opted for a long drawn-out legal battle, in the hope that this would be the best way to avoid them paying any more money. But Q-Music chose to put the listener first. That is extreme customer orientation.

Cartamundi is a tremendous company. It began as a manufacturer of playing cards but nowadays it creates, develops and markets interactive card games that score highly with both end-users and B2B customers (especially retail). Chris Van Doorslaer, CEO of Cartamundi, has made it his mission to be extremely customer-oriented. He told me an anecdote about one of his customer complaints. Apparently, there was a too high concentration of toxic substances in a delivery of playing cards. All the quality controls and safety checks carried out by Cartamundi showed that there shouldn’t have been a problem. Their suppliers of raw materials had also confirmed that everything had been delivered correctly and in accordance with the legal provisions. But on further checking it became apparent that the certificate held by one of the suppliers was invalid. There was indeed a problem – but the fault was not Cartamundi’s. Nevertheless, the company accepted its responsibility as end-supplier. Within days, a new delivery was ready to be sent to the customer. To make this possible, it was necessary to rearrange production schedules and work with external companies. They even bought a new machine. In total, the operation cost Cartamundi about 500,000 euros, which was more than the annual turn-over of the customer concerned and also represented a serious dent in Cartamundi’s results for that year.  But the cost was not their prime consideration: the customer was right and he needed to be helped. Investing this amount of money to help a customer when the fault is not yours is yet another prime example of extreme customer orientation.

It is a useful exercise to go in search of your own ‘symbols of extremism‘. Symbols of extremism are details that allow you to show to your customers (and to yourself) that you actually mean what you say. This might be the quality of the food at Tomorrowland, the best music festival in the world. Or the way the operatives at Carglass always vacuum the carpets in your car after a repair. Or the 7 promises of the Dutch retailer Jumbo. One of these promises is that ‘the fourth in the row doesn’t have to pay’. This is just another way of saying ‘our check-out service is really quick’. The message is the same, but the ‘fourth in the row’ promise offers customers the prospect of something extra. Symbols of extremism of this kind make the customer-oriented attitude more concrete.  They are visible to customers and serve as a guideline for staff.

To hear the entire Customer First story, check out this video

What are your symbols?