My interview with Tony’s Chocolonely’s Chief Evangelist Ynzo Van Zanten, “Our USP is that we are NOT striving to be unique”

I had a great time interviewing Ynzo Van Zanten, the Chief Evangelist of one of the most intriguing brands in the world: Tony’s Chocolonely. For those who haven’t yet heard of this Dutch rebellious outlier: they want to change the industry one chocolate bar, and one farmer at a time because there’s unfortunately still a very bitter reality – of forced child labour – behind the sweetness of chocolate. That’s why they are aiming at producing one hundred percent slave free and delicious chocolate by working directly with 5.500 cocoa beans farmers in Ghana and Ivory Coast and paying them a fair price so they can reach a living income. It took Tony’s Chocolonely about 13 years to build up a strong and profitable brand, but they have since become the market leader in The Netherlands and expanded to many other countries like Scandinavia, Belgium, France, Germany, US and UK. If you rather listen to this conversation, check out my podcast where I talked with Ynzo. 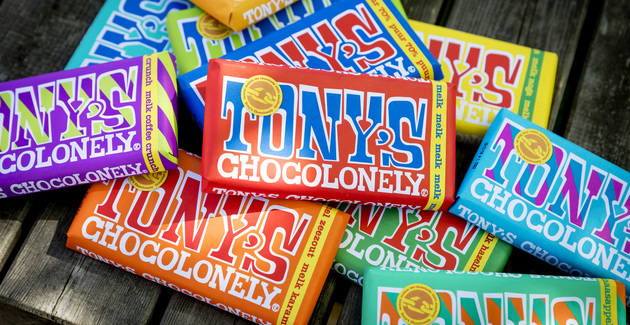 Tony’s Chocolonely has a very unique origin story: Dutch journalist, Teun van de Keuken, was truly shocked when he read a book about child slavery on cocoa farms in West Africa, so he investigated the matter with his Dutch television program ‘Keuringsdienst van Waarde’. Teun rang every single chocolate maker in the world, but nobody would talk to him. So, as an act of protest and to create awareness, he ate a pile of chocolate bars in his television show and turned himself in as a chocolate criminal to the Dutch authorities. But just creating awareness was not enough for Teun. When he saw that people were disgusted, but no one was preparing to act upon on this injustice – thinking something along the lines of “yes, it’s bad but that’s just how it works” – he decided to do it himself and founded Tony’s Chocolonely to change the system from within.

I have to be honest, if someone would have told me 13 years ago that they were going to launch a new chocolate brand in such a mature and saturated market, I would have remained sceptical, thinking that this would necessitate a fortune in advertising money. And yet they succeeded, with no traditional advertising budget at all, only earned media. For Tony’s Chocolonely, marketing is not about creating a push towards consumers, but a pull from the consumers towards them, making people really feel part of the brand. Ynzo Van Zanten told me about the three ingredients they use to engage the consumer.

A delicious product, fun communication and an almost obsessive faithfulness to their mission

The second ingredient of their success is the way they communicate: in a very non-corporate and fun manner. They’re very systematic about it: from their packaging, how they look on the shelf to how they communicate in real life or on the social media channels. The third one is their mission to make chocolate 100% slave free which strongly engages the consumer. The latter really buy into the fact that they’re not just eating delicious chocolate but that they’re actually making sure that the farmers are paid in a just manner and that no slaves were involved. And Tony’s Chocolonely is very adamant and consistent about that mission: not one step is taken without asking the question “will this bring us closer to our mission in an honest manner?”.

What I loved about Ynzo and the Tony’s Chocolonely team is how they are such infallible strategic thinkers, able to integrate their social mission in a clear commercial approach, about which they are very unapologetic, by the way. A beautiful example is how they launch themselves each time in a new market: they first aim at collaborating with the stores that cater to the conscious food lovers, then they enter stores that have a high footfall – train stations, airports and gas stations and after that they turn to the retailers.

Ynzo clearly stated that Tony’s Chocolonely was there to follow the mission and change the system in the first place and only then please the shareholders. But their clear social mission and thirst for impact never stands in the way of commercial thinking. Ynzo, for instance, gave the example that they would not be opposed by a company like Unilever buying them (just like they did with vegetarian meat-replacement company ‘De Vegetarische Slager’ or Ben & jerry’s) if they had the guarantee that Tony’s Chocolonely’s mission and approach would remain intact and if this collaboration would bring their closer to accomplishing their initial mission of 100% slave free chocolate.

There’s never a good excuse for not wanting change

And even though Ynzo loves that Tony’s Chocolonely inspires other social enterprises all over the world about the fact that they too could be financially successful, he would perhaps like even more to inspire the big traditional companies about how they have a moral obligation of doing good for society and the planet around them. And he really believes that they can and should do it, in spite of their ‘baggage’ and slower speed: “Even though startups can build themselves up from the ground as a social company, and smaller companies have less to reorganize, they also have less cash, are more prone to bankruptcy and – if they succeed – tend to have a lot less impact than the big corporates. On the other hand, corporates have much more resources, processes and structures to revise if they want to change, but they also have more brain power, more liquidity, more funds and more of everything, really.” He concluded by adding “There’s never a good excuse for not wanting to make a difference and really live your purpose, whichever type of company you are.”

One of Ynzo’s most beautiful statements during the course of our conversation is that – contrary to any other company in the world – Tony’s Chocolonely wants the competition to copy them, and their mission. Their USP is that they do notwant to be ‘new’ or unique because they want to make a fundamental impact in the lives of every cocoa bean farmer. And you can’t reach that goal if you’re the only one striving to make the industry slave free. It’s one of the reasons why I love the Tony’s Chocolonely brand so much, together with a big community of other fans: as you know, I believe that brands will need to strive towards a triple purpose in the future – by offering great valuable products and services, that help people accomplish their hopes and dreams and help save the world – and Tony’s Chocolonely is a perfect example of that triple mix.