“We will no longer buy products but subscribe to outcomes.” My interview with subscription economy thought leader Tien Tzuo of Zuora

Tien Tzuo, CEO of Zuora, is one of the most fascinating people I’ve met these past few years. He was one of the first employees at salesforce.com, started his own company, Zuora – an enterprise software company that facilitates the subscription economy and subscription business – and has since then become one of the world’s leading thinkers and advocates in the area of the subscription economy. I had the honour and pleasure to interview him for my Steven’s Weekly podcast, and I wanted to share some of the highlights of our conversation here on my blog as well. Please do me a favour and listen to this episode of my podcast, it was really insightful to talk to Tien and here his ideas. 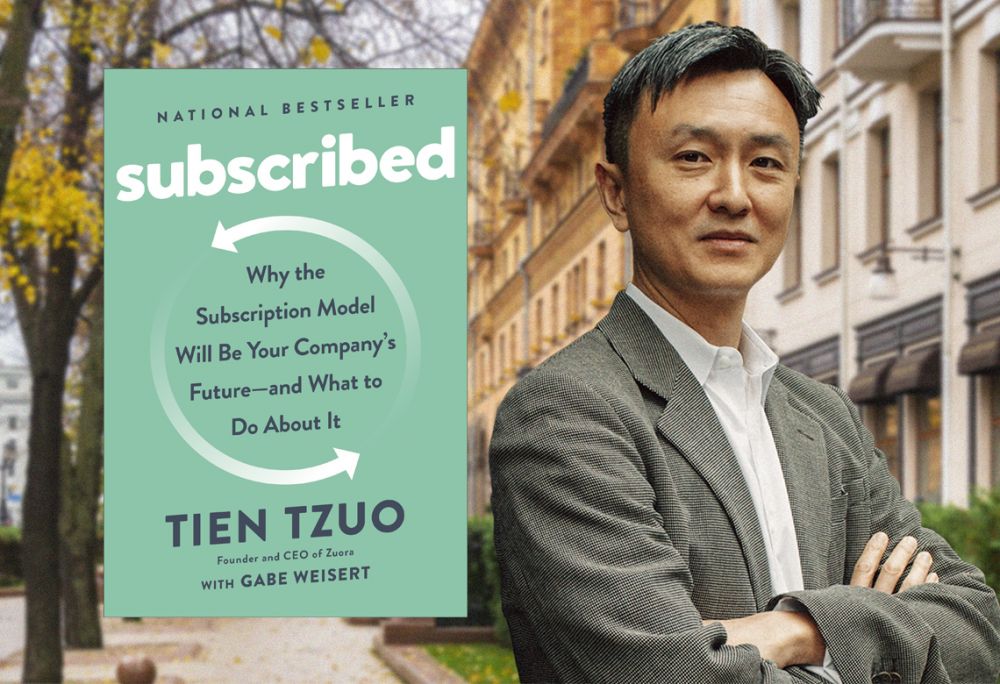 Though many people seem to think that it will merely keep evolving on the peripheries, Tien is a firm believer that the subscription economy will become the actual core of the business world. “This may seem like a big leap”, he explained. “But don’t forget that SaaS and the cloud first strategy, which introduced these types of paradigm shifting subscription models, sounded foreign at first too. And now, few are the people that would want to switch back to buying and owning servers or software. We’re not even only subscribing to technology anymore. We’ve become accustomed to using cars, tractors, movies, music, books and many other things without actually owing them.”

Tien believes that many of us want to be released from the burden of owning things and that we’re only interested in outcomes. So not the CD but the music, not the car but transportation, not the newspaper but understanding what’s going on in the world, not the tractor but moving dirt. And now that everything is becoming connected through the internet of things – cars, bicycles or million-dollar medical scanners even – it’s becoming easier and easier to subscribe to just about anything that is transforming from product into service. That’s why he believes that we’re only at the very beginning of the subscription economy.

One of the most exciting aspects of the subscription model is how it really challenges so many of our assumptions. Like the outcome-thinking he mentioned above, but also about the tension between ‘buying intent’ versus ‘fulfilment of needs’. “Even now that products are connected to the Internet, we’re still stuck into thinking “Will I receive my product on time?” But this connectedness will really flip our way of thinking upside down. From “will I get my pizza delivered on time” to “am I going to have a selection of food ready that I want to eat?” or “Am I going to have everything that I need for clean clothes?” There’s going to be system that takes care of these things at a higher level, even though there certainly will still be physical products in that system. We’re creating this much richer environment that just didn’t exist before.”

The rise of the brand

All signs are pointing towards the fact that we’re experiencing the end of the product era. That single products will be no longer successful and we’re moving into a service and consumer value kind of proposition. Both Tien and I agree over the fact that this evolution will only strengthen the power branding. It’s no longer just about the offering, or even about the interface. As Tien explained, the goal of the brand used to be to ‘only’ convince you to buy the product. But today, that brand has to be built into the experience of the service and so the service has to fulfil the brand’s promise. If it does, you’ll start to see a flywheel where consumers will continue to use the service. If it doesn’t, they’ll simply walk away and you can spend all the money you want in marketing – buying any fancy super bowl ad – but they won’t come back. It’s no longer about loyalty and loyalty programs but about the smart use of data. “Netflix doesn’t talk about loyalty programs”, said Tien. “Netflix talks about engagement, about adoption or churn which you can actually measure and drive impact. It’s about answering questions like “Are my customers engaged with my service?”. How often are they using Uber versus Lyft? How often are they watching movies? How many articles do they read in a week? Measuring that level of engagement tells you if you are providing the right service and delivering value. Today, loyalty just feels like an artificial conversation.

But it will not just be about strong individual brands anymore. We’ll increasingly see brands that bundle – and then transcend – other brands. For instance, it’s a real challenge for traditional car manufacturers to battle a strong platform like Uber by themselves. So it’s fascinating to see more and more competitors like BMW and Daimler join forces to enter the ride sharing service business. Another example is Hulu, where the media companies like AMC, CNBC, Nickelodeon, CBS, BBC America, Food Network and many more bundle their forces to enjoy the benefits of the streaming model. We’ll see more and more strong brands connecting into an overarching brand that’s even more powerful.

The good news for Europe – for once – is that, according to Tien’s company Zuora, the subscription economy is growing faster over here than in the US. Probably because we’re so far behind, but still. The reason might be that the subscription economy is actually a fairly easy way for incumbents to battle the eagerly disruptive start-ups in their industry because they do have those resources and that economy of scale that the smaller companies lack. The ‘only’ thing they have to do is transform the heaps of customers they already have into subscribers. But it’s also a great way to gain new customers.

I for instance loved Tien’s Zuora company case with SNCF, France’s national state-owned railway company which was founded in 1938: “the organization realized it was losing all the teenager students travelling from city to city to the popular long-distance carpooling service BlaBlaCar. In order to lure these young people back and have them experience what it’s like to take an intercity train, they launched a 79 euros a month unlimited subscription service for students. This move turned out to be hugely successful, with about 100,000 students signing up pretty quickly. Now, that also meant that this 80-something government-owned corporate was appropriating quite some market share from a disruptive start-up like BlaBlaCar.” That’s really amazing to see an incumbent disrupting a disruptor, as we all know that it’s usually the other way around. I’m really curious to see if there will be more examples of this down the road.

The conversation with Tien really had me thinking about how consumers and the economy will be evolving. I, for one, really believe that automated buying – like the subscription economy examples, of course – and personal AI assistant will move in between brands and the customer and that this will turn their relationship completely around in new and exciting ways. If you want to learn how, download my free (not even an e-mail required) e-book on that subject here.