5 companies with a fantastic ‘saving the world’ strategy

In my new book ‘The Offer You Can’t Refuse’ I write about how companies will need to climb several ladders up the value chain if they want to stay relevant: moving from a great product or service, to transactional convenience and emotional convenience to even saving the world. With this article, I want to inspire you with 5 stories of companies that have the most fantastic ‘saving the world strategy’.

A “Saving the world” strategy is not about empty purpose or a few cool showcase products. It’s about a ruthless customer first strategy, fantastic products and services, having the guts to follow a daring vision, inspiring other companies to follow suit to increase your impact and even sometimes transforming the whole community around you. Just as important, it’s also about making that journey step by step, not succumbing to perfection pressure and being completely transparent about your progression and, yes, even your failures.

These are 5 companies that have perfectly understood that and I hope that they will trigger you to follow some of their approaches. 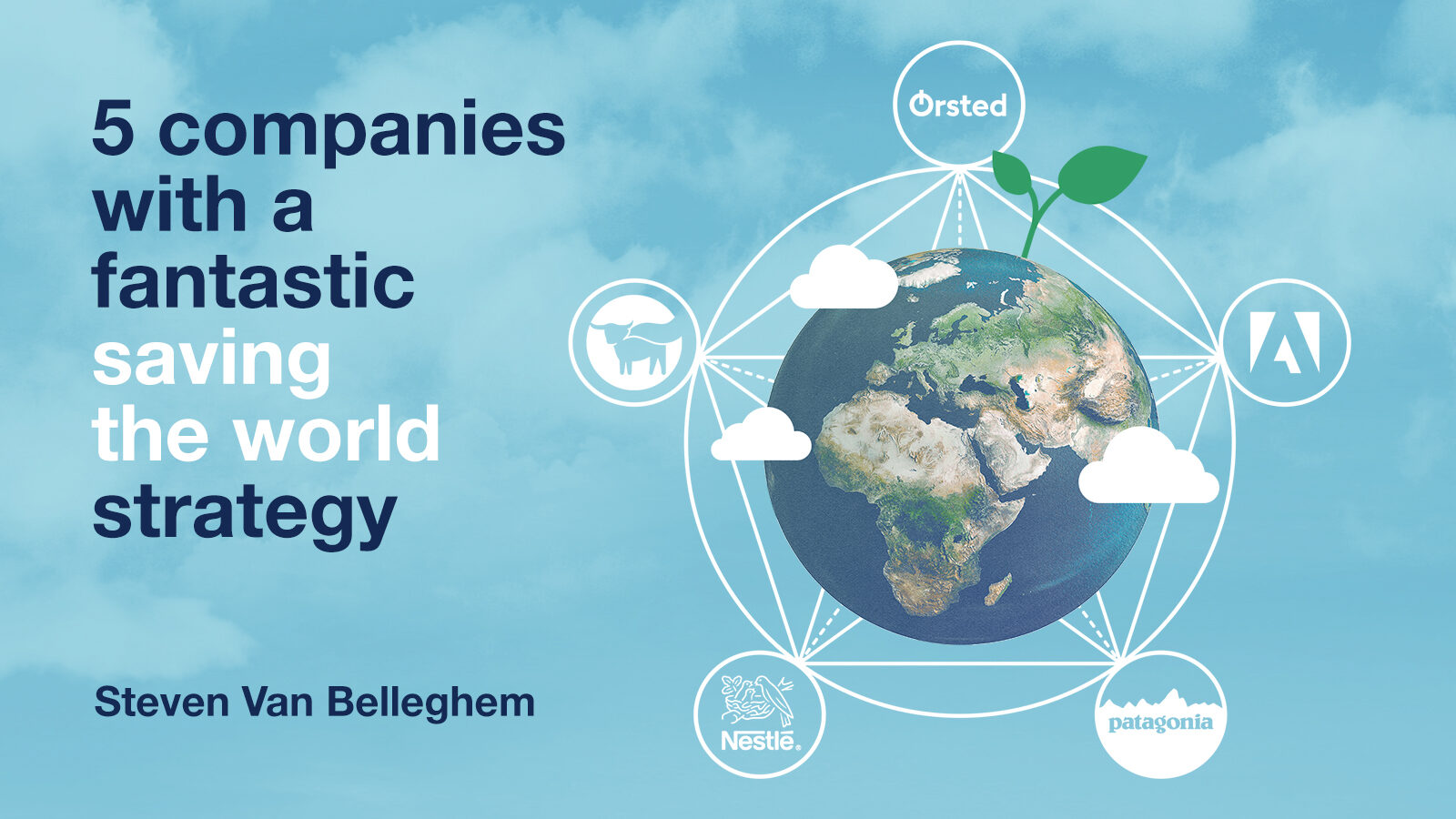 “Business as usual is not going to be enough. We must act now.”, concluded Ørsted CEO Henrik Poulsen when he addressed the world leaders at the United Nations Climate Action Summit. And they most certainly did. A decade ago, Ørsted was one of the most fossil fuel intensive energy companies in Europe and then they decided to completely reinvent themselves into a global green renewable energy provider. Since then, they have become the global leader in offshore wind and they substantially grew their business while significantly reducing their carbon emissions by no less than 86%. By 2025, they will be carbon neutral in all energy generation and operations and they have a target of achieving a carbon neutral footprint by 2040. As part of its transformation, Ørsted invested in no less than 20 sustainability programs, including a decarbonization initiative with a goal of getting Ørsted coal-free by 2023. Today, The transformation has come to a point where the vast majority of our energy production comes from renewable sources.

With such a radical and powerful transformation, no surprise that they ranked as the most sustainable company in the world in the Corporate Knights 2020 Global 100 index of most sustainable corporations, climbing 69 spots since 2018. This is one of my favorite stories about companies saving the world because their sense of purpose and vision was so honest and powerful that they were able to make one of the most extreme transformations out there.

91% of Adobe employees believe that their company and products have a positive impact on society. And the company does indeed invest a lot in social, educational and sustainable projects – often chosen, triggered and lead by their own employees – to make the world a better place.

Adobe donates for instance millions of dollars in products each year to help promote creative careers and help nonprofits get their messages out into the world. Even better, it also invests in several programs to put talented and motivated people on the path to success. Adobe Digital Academy, for instance, offers career switchers the education and experience they need to launch successful careers in user experience (UX) design, data science, and web development. It’s a very clever way of combining one of this century’s biggest problems – the war for tech talent – with a “Do Good For The World” strategy. What I perhaps love the most about this is that they open source their playbook with guidance for organizations that want to develop their own apprenticeship programs. It’s no longer just about them helping people switch careers and build better lives, but about them helping others do the very same. It’s the ultimate “Pay it forward” strategy.

The reason why Adobe’s saving the world strategy is so far-reaching is because every one of those projects has a connection with their own core offer and talents, aimed at boosting creativity and creative people everywhere in the world. Its power lies in consistency.

Patagonia is one of the world’s most successful activewear retailers and it has a corporate philosophy deeply rooted in sustainability. As Founder Yvon Chouinard puts it “Patagonia is in business to save our home planet.” Nearly 70 per cent of Patagonia’s products are made from recycled materials, including plastic bottles, and the goal is to use 100 per cent renewable or recycled materials by 2025. It is committed to promoting simplicity, utility and durability in a world where fast fashion is the norm by creating high-quality, long-lasting products, and offering a repair and reuse program. It even goes so far as to discourage customers from purchasing too many of its products.

The company has also been a tireless supporter of grassroots environmental efforts, recently accounting that $20,000,000 has been donated through customer contributors to Patagonia Action Works. Together with other brands like Klean Kanteen and Honest tea, the company pays a self-imposed Earth tax – 1% for the Planet – which provides support to environmental nonprofits working to defend air, land and water around the globe.

In a sector plagued by a bad reputation for poor labor conditions, Patagonia is leading the way. It received the second highest rating in the 2019 Ethical Fashion Report, which assesses the payment of a living wage, transparency, and worker empowerment.

Most of all, Patagonia is not afraid to admit that it’s far from perfect and it has always been completely transparent about what it could do better: like using fossil fuels to produce shells for their coats, which contributes to climate change. It’s exactly this fear of failure and perfection obsession that stands in the way of many companies who feel that the gap between their current and desirable situation is too big to move. Many other sustainable and social companies like Tony’s Chocolonely have the same approach (check my interview with Ynzo Van Zanten here): they continuously strive to improve themselves, while staying open about all the things they could do better.

There are many ways for companies to save the world, but perhaps the most profound one happens when companies redesign the entire ecosystem in which the organization operates for the better. It was Filip Caeldries who first told me about the Nestle milk roads during our podcast conversation last year and it has been one of my favorite examples ever since.

When Nestle develops a dairy business in a new country, access to a good road infrastructure to transport the local milk and making sure that said milk is of the best quality, is key. So, if the region’s infrastructure does not suffice, Nestle build new roads  to bring the milk faster to the factory. Even better, it pays the farmers a higher price and offer them low interest loans. That allows them to invest in better stables and send their children to schools that they have often built themselves. They also organize veterinary, hygiene and sustainability programs so the farmers learn to treat their animals better, which results in better quality of milk. Since 2016, it has for instance invested MXN 36.5 million (about 1.5 million euros) to develop dairy farmers and milk transportation systems in Mexico. At the core of this is its agripreneurship program: by the end of 2019, 296 agripreneurs had been trained in the Mexican dairy sector and the latter shared their training with around 3500 farmers, benefiting 8617 families.

This is a fantastic example of a private company that has a positive impact on the entire ecosystem that surrounds it: from farming and distributions to supply chain, schooling and water use.

The meat industry is one of the biggest contributors to the climate change crisis and I’m a big fan of companies like Beyond Meat that are trying to save the planet in ways that go far beyond the bland, dry and sometimes carboard-like taste of so many vegetarian alternatives. Beyond Meat is shaking up the food industry with its delectable plant-based “meat” products that are not just better for the environment and climate change but also healthier for people (and for the animals that get to stay alive, obviously). Their Beyond Burger (compared to a quarter pound of domestic beef) for instance produces 90% fewer greenhouse gasses while requiring 46% less energy and carrying 99% less impact on water scarcity and 93% less impact on land usage.

The true reason why they are so popular and why chain retailers like A&W, Carl’s Jr., Dunkin’ Donuts, TGI Friday’s, Del Taco, Subway and others are lining up partner with them is because of their fantastically tasting products. I’ve written often about this, companies like them are so successful because they first start with the consumer in order to get the product absolutely right. Working your way backwards from saving the world first and only then figuring out how to make your products will never grant you the same amount of success. After all why would the adage of customer centricity not apply to this type of company, right?

And Beyond Meat has the numbers to prove it with a revenue number of which the top line was about $16 million in 2016, and it grew to nearly $300 million in 2019. No wonder that it has become one of the hottest topics of conversation among both investors in the stock market and consumers.

I know that “Saving the world” sound Big with a capital B. But this type of approach will become the norm in the coming years, now that some problems like climate change have become so huge that the impact is already palpable for many people on earth. As with everything else, my advice here too is to first build a consistent long-term vision and then work your way up to there, step by manageable step, unafraid of being fully transparent about your progress.