These are the 5 customer benefits of Web3

I’ve been reading a lot about Web3 for the past weeks, a subject that really intrigues me. So much so, in fact, that I’m organizing a tour about it with nexxworks and Peter Hinssen in May, but that’s a different story. What I want to write about today, is about the intersection between my own passion – CX – and this trending technology. So be sure to stick around if you’re eager to find out what the customer benefits are of Web3. 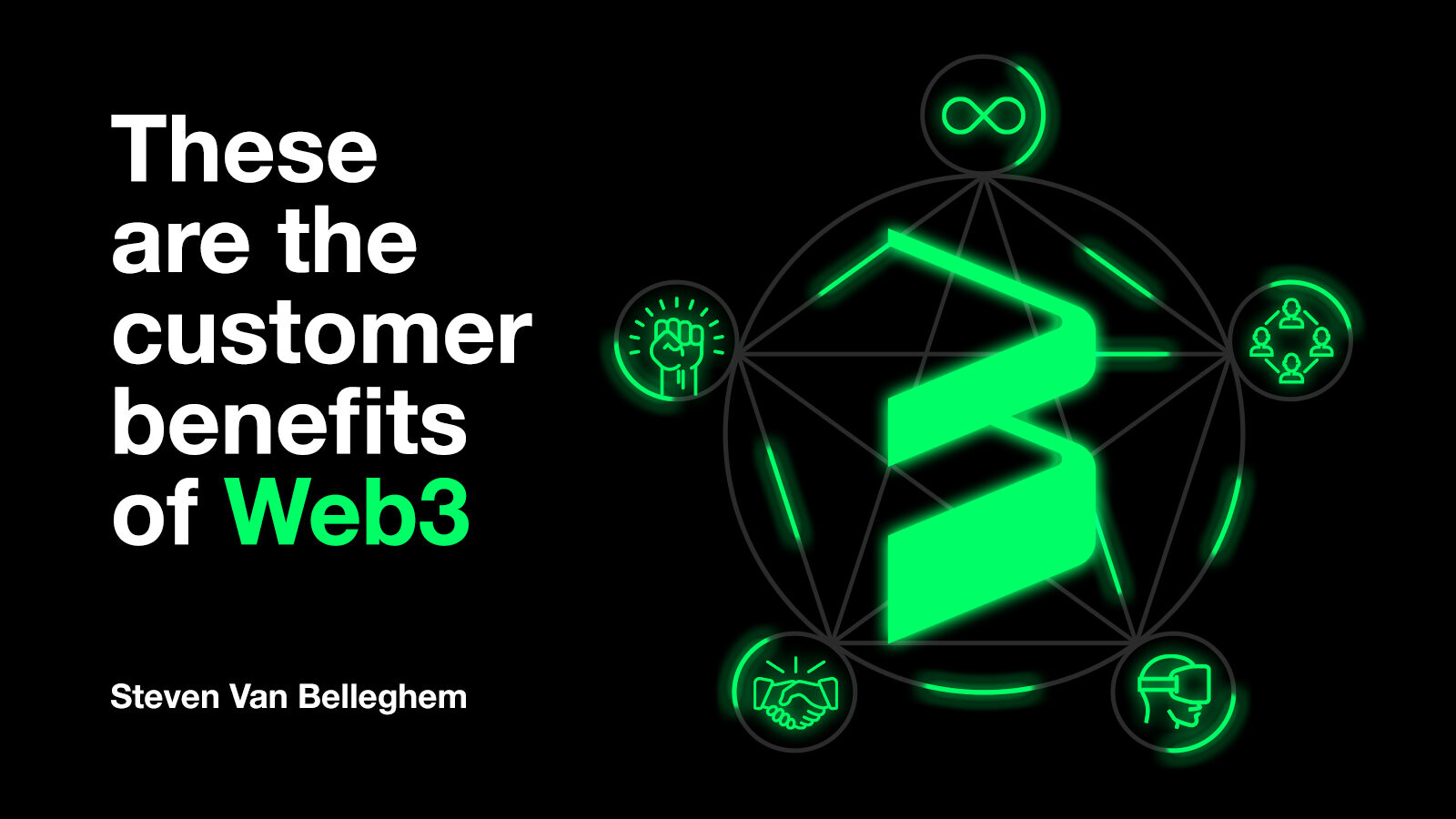 For those of you who’re still pretty new to Web3, first a very short tutorial on what it is:

Web1, the first – read-only – version of the internet, consisted of simple, static websites with limited functionality or interaction. In the next phase, that of Web2, the web became participatory. Users could create content, interact freely with each other, share information etc. This is called the read-write phase. The drawback here was concentration of power, centralized in a few giant players like Facebook, Google and Twitter.

Web3, then, is supposed to be a decentralized version of the internet that leverages blockchain technology. It’s defining feature is ownership, as it gives users full control over their content, data, and assets via blockchains. The dream is that Web3 will use blockchain, crypto, and NFTs to transfer power back to the internet community and, in doing so, break the monopoly of the Web2 giants. That it will bring us a fairer, more autonomous and open internet.

Of course, Web3 is still being built, which means we don’t exactly know what it will exactly look like. But for me that’s all the more reason to investigate what it will mean for customers. Personally, I’m mostly excited about the fact that many are claiming that it will be a user-centric iteration of the internet (whereas Web2 was application-centric): offering more power, more control, more security and more privacy to its users. So let’s unpack what that will means for users and/or consumers.

With Web3, end-users will regain the complete ownership and control of their data and enjoy the security of encryption. This means that they will be able to choose if and when information about them can be shared and/or used with or by advertisers, marketers, researchers etc. One way to do that, is with simple and intuitive interfaces that will allow users to understand what information they are sharing with web service providers.

If you think that’s not such a big deal, think again. It does not just have a huge impact on the consumer’s privacy and security, it holds the potential to grant them full control over personalization and even receive money for the use of their information. They could for instance earn micropayments for survey responses. Or even get paid with tokens for consuming or sharing content.

As a positive side effect, this change in data ownership hopefully will soften the deepened polarization of society that has been driven by the echo chambers of social media like Facebook. And of course, it will drive marketing efforts to become a lot more ethical, because this data model is a lot more transparent and user-empowered. Consumers will be able to track their data and look over the source code of the platforms they decide to utilize. This, in turn, will restore the trust between consumer and brands, which is especially important after the negative feelings against the likes of Facebook or even Amazon.

The end of online borders

We’re so used to this that we almost never think about it, but there is one BIG difference between the physical and the online world and that’s “interoperability”. If you buy a dress in Zara, you’ll be able to wear it at home, at work, in the street, in the forest and everywhere you want. If you would theoretically buy a digital version of this Zara dress in Roblox (a game part of the metaverse), you will probably not be able to wear it in, let’s say, Meta’s Horizon metaverse. That’s because the metaverse, for now, is a collection of separate metaverses and not one big open platform. That means that consumers can almost never move digital possessions from one virtual world to another. That is extremely inconvenient, but we almost never think about it because it has always been this way.

Web3 has the power to change that. All your information and your possessions will be centralized in your own little ‘suitcase’ – be it a cryptowallet or an self-sovereign identity (SSI) space – as tokens. What you own, will be connected with your identity instead of with a platform. Which will allow you to take everything with you as you hop from one application or ecosystem to another. This also holds the power to have a huge impact on the interoperability between IoT devices in general and those of smart homes and smart cities in particular.

But the impact of Web3 could go far beyond merely privacy and convenience. One of my favorite parts is that users or consumers will be able to participate in the value and influence of companies. This is where NFTs and smart contracts could have a huge role to play.

An NFT or non-fungible token is a record on a cryptocurrency’s blockchain that represents a piece of digital media. Non-fungible means that it is a unique digital piece and that it cannot be replaced with something else. To borrow an analogy from Verge: “a bitcoin is fungible — trade one for another bitcoin, and you’ll have exactly the same thing. A one-of-a-kind trading card, however, is non-fungible. If you traded it for a different card, you’d have something completely different.”

What is happening with NFTs today is still mostly gimmick (read my piece about them here), but I really see them move beyond the current ‘exciting’ collectibles phase (like that infamous Beeple painting that sold for $69.3 million) and deeply change the game in customer loyalty. They can offer smart contracts, which could play a really important role in boosting customer engagement. The example that I love to give is how Kings of Leon released an album as an NFT and their tokens – including a limited amount of unique-looking “golden tickets” – unlock special perks like limited-edition vinyl and front row seats to future concerts.

The most interesting potential of NFTs lies in the concept of what I call branded economies. Most current loyalty systems – like frequent flyer programs – are completely out of balance: more benefits go to the company than to the customer. NFTs will involve the customers a lot more, who will then become part of the journey. If I, as a frequent flyer, would have an NFT stake in a company, we will both have a shared interest instead of opposed ones. In other words: if the company does well, the value of the NFT will rise and then I will do well too. And so I, as a customer, will benefit when the brand performs better and will therefore become its ambassador. In fact, the customer becomes an emotional shareholder.

But it’s not just value that will be shared. It’s about shared influence as well. And here the DAOs – decentralized autonomous organizations – can play a major role. Basically DAOs are organizations, but on the internet, where the rules are written down in a smart contract which are chunks of code that automatically execute whenever a set of criteria are met. (Read the interview of my company nexxworks with Maarten Smakman if you want to understand how they work.)

A great example of a DAO  offering more influence to users could be Chingari, which is an India-based social-video-sharing platform, that might potentially become a TikTok competitor. Chingari supports Web3 principles but the most fascinating part is that it will eventually function as a DAO where people who have stakes in it can influence its direction. So the Web3 model would not just allow customers to share in a company’s value but to influence it too. This too – just like the data ownership part as described above – would empower them and shift their relationships with organizations to entirely different levels.

The DAO part of Web3 also holds a lot of potential for helping users and consumers organize themselves online and create organizations by automating ownership and decision-making power among members. DAOs are a great way to quickly and fairly allow groups of people to work together, whether it’s in an organization or just a one-off project. All the stuff that traditionally takes lots of lawyers and paperwork and time, and gets even more complicated if those participants live in different states or countries, would happen a lot more efficiently.

It would in theory be possible to measure the work that each participant contributes to a project: one person wrote code, another helped with marketing, someone else helped manage a Discord server where the DAO members meet up. This could be interesting to launch startups for instance, but that is not the focus of this piece. But just imagine what that could mean if disgruntled consumers would legally unite against a brand. Or if their biggest fans would create a powerful community. I think the combination of DAO plus community plus consumer could prove to be very interesting moving forward.

Last but not least Web3 – especially when combined with that other hot trend of the metaverse – holds the potential to enhance user experiences in ways that make them more fun, more relevant, more community-driven and more immersive.

First this: only parts of the metaverse can be considered a Web3 phenomenon. Highly centralized metaverse platforms like Meta’s Horizon are not (yet) a part of Web3, although the company did recently announce plans to look into crypto and blockchain for that reason. Only the decentralized platforms like Decentraland can strictly be considered Web3. However, it’s a bit more complicated than that: metaverse platforms can sell digital goods as tokens, often non-fungible ones (NFTs) which are a part of Web3. Virtual land in the metaverse can for instance be sold as an NFT. Or end 2021 Nike bought virtual shoe company RTFKT to sell sneakers as NFTs in the metaverse. Gap has also started selling NFTs of its iconic logo sweatshirts for the metaverse. The reason why the metaverse would function a lot better if it was part of Web3 is – as I stated above – interoperability: you could then buy a virtual Nike sneaker and wear it across all platforms.

The combination of ownership, smart contracts, reward systems and immersion could be really interesting for metaverse platform customers. Users who decide which companies get their data and for what, will for instance enjoy services that are a lot more personal and tailored, changing the relationship between them and brands.

So, for me, these are the most relevant users benefits for users in Web3 that first come to mind:

I’m curious to know what yours are. Let me know in the comments of my socials!